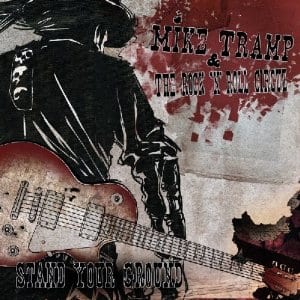 Mike Tramp continues to be productive, restless and musically active without showing any sign of resting in his past laurels as so many colleagues of his era has done so. “Stand Your Ground” is the second album by the Danish singer with his band Rock N’ Roll Circuz and I wish I could write positive things about it but I won’t write off this album by posting negative comments about it. The truth is that the album is quite typical; you don’t turn your back on the songs but they don’t grab you by the neck either; you don’t press the “skip” button on your c.d. player but you don’t pay that much attention; the band’s performance is good but not as good as to throw your back on the wall…all in all, quite an average effort.
If “Stand Your Ground” would have been released in the 80s, then it might have spawned 1-2 minor hits but in this rapidly changed, fast era of rock n roll, I am pretty sure that Tramp’s effort won’t raise many eyebrows (despite the fact that the ex-White Lion singer characterized this album as his masterpiece…oh well!).
Highlight: If the cover sleeve reminds you of Volbeat, it’s because this is the same artist (Karsten Sand)