This was a show that a lot of American hard rock fans were waiting eagerly, since this was the first time that founder and singer of Steelheart, Miljenko Matijevic, was playing in Greece.

What’s great is that in the last few years there have been several moves that allowed us to watch artists that we used to check out on MTV, Super Channel and all the satellite channels of those times. Steelheart might not have reached the level of popularity and success of Slaughter, Firehouse, Warrant etc, but they were always a point of reference thanks to their first two albums and the amazing ballad “She’s Gone” where Matijevic was reaching…God with his incredible voice. As you might imagine our expectations were running high, but unfortunately we were disappointed with what Matijevic had to offer.

But, let’s start from the beginning… The show opened with Silked & Stained who played several acoustic covers of Queen, Roxette, Toto, Led Zeppelin originals with the female singer of the band replacing the main lead singer for this show, which she actually stole with her amazing performance. As a matter of fact AOR fans out there should definitely check out their song “Much Love”.

George Gakis was next and he was incredible as always! With only a guitar in his hands and covers of Whitesnake, Bon Jovi, Deep Purple, Beatles, Stones, Winger, Rainbow etc managed to make the crowd go wild, while his voice was in perfect condition. He also played “Street Of Broken Dreams” reminding us Joe Lynn Turner’s upcoming show in Preveza this August. Personally, I’d say that Gakis was the absolute super star of the evening and he made the perfect warm up before the perfect… let down!

With almost half an hour delay, Matijevic got on stage, after he entered Bat City surrounded a couple of bodyguards so that nobody could touch the rockstar! He also gave orders to stop, or at least limit smoking in the club (that’s not bad at all!) and from the moment he started playing with his acoustic guitar trouble started. First, he wasn’t happy with the monitors, then with his strings and then the sound engineer. He had to stop several times in between of songs to tune his guitar, and not even once did he address to the Greek crowd that graced him with its presence (we were 130-140 people there). Matijevic presented a self-destructive setlist playing only on hit of the past (“I’ll Never Let You Go”) while the rest of the songs (that personally didn’t move me at all) reminded us of the unplugged album by Page & Plant 20 odd years ago.

He didn’t play “She’s Gone”, not even one of the other most popular songs off the first two albums that the people was waiting for. At some point, after an hour or so he took his guitar and left without even saying “goodbye”… everybody thought that he was going to return for an encore with his popular songs. But, he didn’t letting down everyone in the club that couldn’t believe what happened! Unfortunately, we experienced a total rip-off by Matijevic and I don’t think that any promoter will ever dare to bring him back to Greece after that poor show and the attitude he showed towards the crowd. And one last thing: Mr. Matijevic you are not Jon Bon Jovi to have that ignorant approach! Unfortunately, I have to inform you that you lost a lot of fans that night. 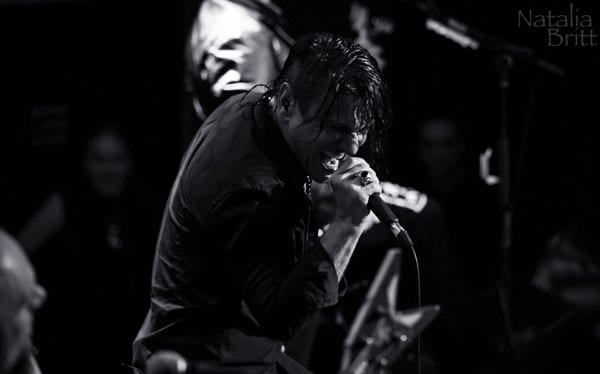