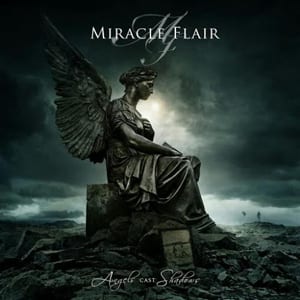 The Swiss’ second album comes out with a delay of five years since their debut. This fact by itself reveals a malfunction in Miracle Flair. Massacre’s press release refers to, among others, symphonic metal something that is nowhere to be found in “Angels Cast Shadows” since the orchestra element is totally missing.

The band is trying to present a contemporary version of this particular genre putting the guitars upfront with strong, short edgy riffs but the sound they create is flat with no depth at all. When it comes to compositions and melodies “Angels Cast Shadows” can’t take a higher grade than just a pass. Although Miracle Flair seem to be influenced by Evanescence and Lacuna Coil, they haven’t added their personal touch and there is no songs, or even a song that stands out here.

I think the album is poor, since I haven’t found anything in it that would make me listen to it again beyond the necessary hearings for this report.