Shortly after a really touching performance of Molly Hatchet at Hard Rock Hell VI festival in Pwllheli, Wales, Bobby Ingram talked with Dimitris Kazantzis about many things, many more than initially expected. Keep reading and you’ll see what this great guitarist and composer shared with us. 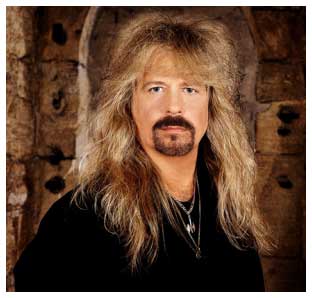 Rockpages.gr: Molly Hatchet has some really unique and impressive album cover artworks. Tell us a few things about the background of those album sleeves…

Bobby Ingram: We’ve been coming over to the United Kingdom for a while now and we were honored to meet Paul Raymond Gregory who is based on London, England. He is the official Molly Hatchet album cover artist…he is phenomenal. He’s got a fabulous website…he has done Molly Hatchet, Dio, various Lord of the Rings…fantasy kind of stuff. Paul has been with us longer than any other artist who had worked with us in the past. Our collaboration is very easy and smooth. We talk on the phone a couple of times; I explain to him what’s the album all about…the concept…and after a while, he presents to us the canvas, the artwork. He designs what he feels about the concept, his artistic translation, if you prefer, of what I explained to him over the phone. He is amazing!

Rockpages.gr: Do you have a favorite Molly Hatchet song?

Bobby Ingram: Oh my goodness! It’s like asking me what my favorite child is (laughs)! Well, there is definitely a song that means a lot to me called “Rainbow Bridge”. It’s about my wife who passed away 10 years ago. “Devil’s Canyon” also means a lot to me…it kinda started the second generation of Molly Hatchet.  It was fabulously received all over the world by the music press. There are so many other songs along the way that have their own meaning…“Dreams I’ll Never See” is of course another Molly Hatchet song that I like…and naturally all the classics like “Beating The Odds”, “Fall of the Peacemaker” and many others.

Rockpages.gr: Do you know any Molly Hatchet song covered by another band and you really like it?

Bobby Ingram: I think that Drive By Trackers covered one of our songs…there could have been others but I don’t really remember right now.

Rockpages.gr: Can you please tell me the feedback so far of your albums the last decade? I thing you are the only so active band of the southern rock bands…

Bobby Ingram: When we got back in recording some Molly Hatchet albums in the mid-90s, we had been…well, we had been with almost anybody up to that point…CBS, Capitol Records…it started to get diluted, you know. We were very much influenced by the management telling us what to play, what sort of direction we should follow. That kinda tore the band apart…musically speaking. When we got back to recording again, I promised myself that I will never let that happen again. We write our own songs, our own material and we don’t bring outside collaborators. We stick to our vision, to the Molly Hatchet vision. These days are over. After “Devil’s Canyon”, I have to say that this is t 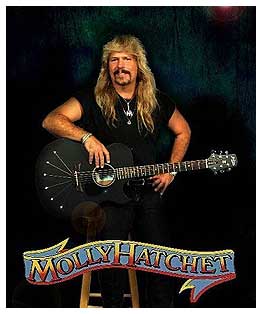 he true Molly Hatchet spirit. This is what and who we are. We play people’s music for the people! We listen to people…when we meet our fans who are really our friends, we listen to what their opinion is; we pay attention to what they think about our albums. It also means a lot to us to see older fans coming to our shows with their sons or even grandsons…it’s a new generation of Molly Hatchet fans out there (laughs)! But the truth is that we write about the everyday lives of the people…we write about the everyday problems, the everyday good times. We listen stories about sons getting killed in Afghanistan or Iraq…we try to put those things in our songs…make them their own. That’s the spirit of Molly Hatchet. We are a family-oriented band…we listen to our fans and that is something that will never change. That’s why we’ve been around for so long. That’s the foundation of the band. We’ve been blessed with a craft; we’ve been able to translate our experiences to songs. I think that’s why we relate to people.

Rockpages.gr: I would like to let me know your opinion about the differences between the American and the European audience. Maybe the European one is not so close to this music feeling?

Bobby Ingram: You know…I used to think that. Southern rock n’ roll started in America and some people might think that it is a strictly American business type of thing. The truth is that we didn’t even invent the term “southern rock”. It’s not like we started thinking “let’s play southern rock music”. In the beginning there were Skynyrd, Allman Brothers, Molly Hatchet…we all knew each other. We shared the same stages; we turned some 3-minute songs into 40-minute epics (laughs). We didn’t know what we were doing…we were just jamming. Luckily for us we got our music out to the world straight from Jacksonville, Florida.

Rockpages.gr: I’m coming from far away, Greece. Do you know anything about the Greek audience?

Bobby Ingram: We had a couple of offers to come to Greece but unfortunately we never made it to your country. We wanna come to Greece. You guys, the media guys is the medium between Molly Hatchet and the fans. You have to tell the fans that we are here for them…through the radio, through the magazine…you are the link; we are all into this together…band, press, fans. So, I will leave it up to you to get us over there to Greece!

Rockpages.gr: Do you prefer to perform in a small rock club, in a casino, a stadium or in a festival?

Bobby Ingram: To be honest, it’s all the same feeling for me. Yes, I’d love to perform in front of a big crowd but it’s really the same when you are playing in front of few yet loyal Molly Hatchet fans. It’s the same for us if we play in front of 50 people or 5000 people…it doesn’t matter. We play just as hard and we don’t say it’s a small place, let’s not give our best. Molly Hatchet always gives the best to its fans!

Rockpages.gr: Your plans for the near future? 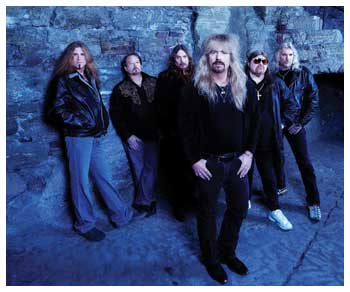 Bobby Ingram: We have a lot of plans…we are going into the studio in the coming months to record a new album that will be released in 2014; we got a DVD coming out that will include much unreleased footage of the past. We got a lot in the can! We also have the cruises that we are doing with so many other bands…that’s pretty cool and I suggest that everyone should come to a cruise to see us play. It’s definitely an once in a lifetime experience.

Rockpages.gr: Before we close, I need a few words for Danny Joe Brown who passed away a few years ago…

Bobby Ingram: I had a band called Rum Creek in Jacksonville, Florida…that was in 1975…I was looking for a singer. A guy appears in the rehearsals…short-haired, cotton tie, a corporate type of guy…so, anyway, this guy comes to me and says: Bobby, I like the band and I can really sing…he auditioned for the band…then, I asked him…I will never forget this…do you know how to be a great frontman? And he says: “What is a frontman (laughs)? This was Danny Joe Brown who turned out to be one of the top 5 greatest frontmen in rock n’ roll! Danny was amazing and I am proud to say that I was the guy who handed Danny the microphone to sing way before Moll Hatchet. I saw his first show and I saw his last show. We were best friends all our lives. I met him when I was 17 and I am 55 years old now. He had diabetes and a heart condition…sad thing. He gave a lot to southern rock n roll. He’s really made a mark worldwide. We all miss him…we all love him!