What’s even better than a Monster Magnet show? Two of them in a row. I followed the band in Thessaloniki, for an even more intimate, warmer experience due to the venue but thanks to the livelier crowd as well.

Sixfornine were supporting, with Fotis Benardo on vocals. I‘ve seen them before during the last Fates Warning visit in Athens, and my impressions were the same: Very tight band, songs that stay in your head, in a style that isn’t that common in Greece. We are looking forward to the future.

After the usual Black Sabbath songs were played by the PA, Wyndorf, Caivano and the rest of them came on stage. The setlist was the same as in Athens, with very strong moments but some stuff missing as well. The group looked more at ease in a traditional rock venue. The sound was clearer than at Gazi Music Hall, but the vocals especially were very low in the mix. That didn’t stop anyone from taking in as much psychedelic energy as possible during ‘Spine of God’, ‘End of Time’ and ‘Stay Tuned’, or enjoying Wyndorf’s theatrical performance.

I hope they’ll be back soon; I do have reasons to believe that Dave has good memories from the after party. The space lord still has game.

Setlist:  The Right Stuff, Dopes to Infinity, Look to Your Orb for the Warning, Twin Earth, I Live Behind the Clouds, Last Patrol, The Duke of Supernature, Spine of God, End of Time, Stay Tuned
Encore: Three Kingfishers, Tractor, Space Lord 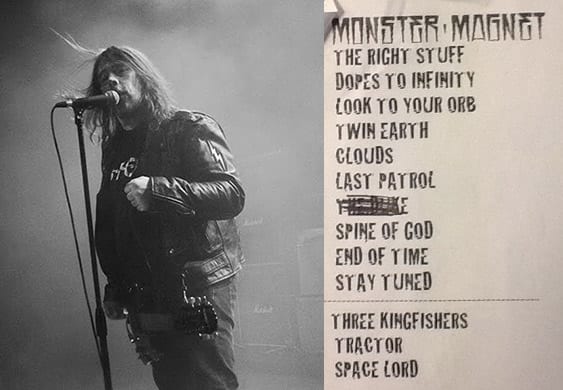