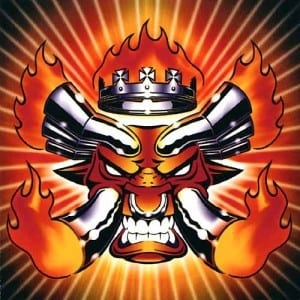 You’ve heard and read countless great things about records like ‘Dopes to Infinity’ or ‘Powertrip’. In the turn of the millennium (the album came out in 2000 in Europe and 2001 in the US) Monster Magnet were supposed to exploit the

success of the latter by releasing a follow up/sequel, but god declined and they… failed. The thing is they failed in the most charming way, delivering this underrated masterpiece that deserves to get a second chance, both by music fans and its creator.

What ‘God Says No’ misses is some of the ‘dirtiness’ in the sound of the band. Other than that the compositions here are amazing. The pause in the middle of ‘Melt’, the attitude throughout ‘Doomsday’, the riff in ‘My Little Friend’, the finale of ‘Queen of You’, the innuendo in ‘Take It’, the chorus in ‘Cry’ and the verses in ‘Silver Future’ are only some of the genius moments in this album. I have to mention the lyrics, because, with his original lyrics stolen, Dave Wyndorf delivers a manifesto in coolness and underlying melancholy, with every word sang with a devilish smile and a raised eyebrow.
Let’s hope this intoxicating record gets represented in the future shows of the band.