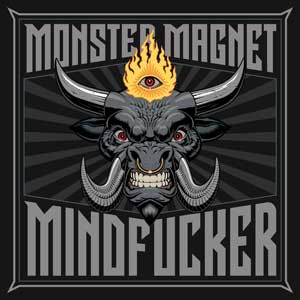 With the master of light and son of the cobra Dave Wyndorf reaching 60, the band’s discography now having 10 albums and counting 20 years since ‘Powertrip’, the fact that Monster Magnet are still alive and kicking ass is a true blessing.

Although I adore the slow burning, psychedelic side of the group, which was predominant on the magnificent ‘Last Patrol’ album, I was secretly hoping that lord Dave wouldn’t resist the temptation to write one more up-tempo record, just to show the rest of the planet how rock n’ roll is properly done. ‘Mindfucker’ is just that. It doesn’t have the most original riffs of all time, but it has songs that ooze attitude, in a way that they haven’t maybe since ‘Monolithic Baby!’. The epic closer, ‘When the Hammer Comes Down’, is maybe the best example of what I’m trying to describe. As always, you must listen to the record while reading the lyrics. ‘Cause if you want some, nobody does it like him.