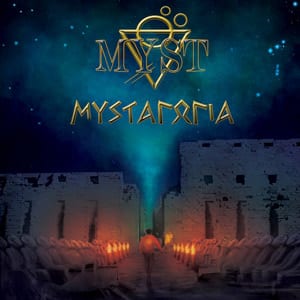 Our fellow countrymen Myst have been around for more than 10 years but their debut album just emerged through Rock of Angels Records. I must confess that I had never crossed paths with this band before and I gave the album a spin without knowing what to expect. And I came across a pleasant surprise since Mystagogia is a totally professional album in the European Power metal vein. But not the europower kind with the superfast speed and the endless double bass. In some parts it reminded me the great Arrayan Path from Cyprus (just listen to Osiris Awaken for example, maybe their best moment) and fellow countrymen Black Fate  but as more recognizing reference points I choose international names like Kamelot and Helloween. The strongest point is the performance of vocalist Faidon Diamantopoulos while production is decent and it’s quite pleasant that most Greek bands are no longer ruined by unfitting or even catastrophic productions since that was the case in the past.

I wish that Myst will continue on an ascending path since they have the potential to write and record music of the highest caliber.