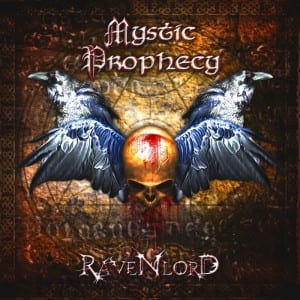 I hold in high esteem and respect Dimitris Liapakis and what he has achieved with Mystic Prophecy through the years. It is what so colorfully described as “pride for a fellow countryman”. I enjoy the same feeling every single time I read something about Rotting Christ or Gus G. (just to name a couple of Greek artists). Mystic Prophecy does something fairly simple, almost implicit: they work really hard! It is a “recipe” that every band out there should follow if they wanna succeed in this cruel music business. Liapakis and Co. has done almost the unthinkable as they keep on releasing great records after great record with the summit being the excellent “Fireangel”.
“Ravenlord” had the difficult task to look straight between the eyes its predecessor and Dimitris Liapakis chose the rough road with deciding not to base the structure of his songs on the same formula as he did on “Fireangel”. On the contrary, he wrote even heavier and sinister songs, changed his voice a little bit (no worries here as his raspy sound remains intact) and delivered yet another flawless production. Be cautious, though…“Ravenlord” needs at least 3-4 listening spins on your c.d. player before deciding upon its overall evaluation. It’s not such an easy or catchy bunch of songs but it is definitely worthy of everyone’s attention. “Ravenlord” finds easily a place among the Top-5 albums of 2011.
Highlight: Something’s cooking into a…devil’s train this coming February. We’ll keep you posted!