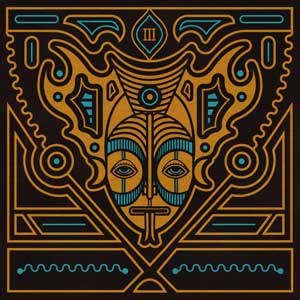 Naxatras from Thessaloniki after “I” and “II”, the endless live shows (including Europe) and the significant support act for 1000MODS at Piraeus Academy (which proved that they have a huge crowd of fans) continue their upward course and release one of the best albums of the current year.

“III” includes 7 songs and over one hour of music. Naxatras show a slightly more gentle face than the album’s predecessors, but they do not lose their heaviness.

Distortions of the guitar are reduced, while 4 of the songs have vocals. Their style stands strong as psychedelic and stoner, but now (perhaps because of the fairly consistent structure of the compositions, considering that it is an improvisation band), they can also move classic rock fans. Hendrix solo , Pink Floyd atmosphere, while in the wonderful “Prophet” I remembered of ELOY. Impressive riffs and melodies, awesome ideas in every song, will make you hit the repeat button.

Most importantly, there is a variety of intensity and style of compositions, and starting with headbanging you will end up making a love confession with the marvelous “Spring song”.

I think this is a jump for the band and that they can no longer look back after this.
Easily in the ten best of 2018.