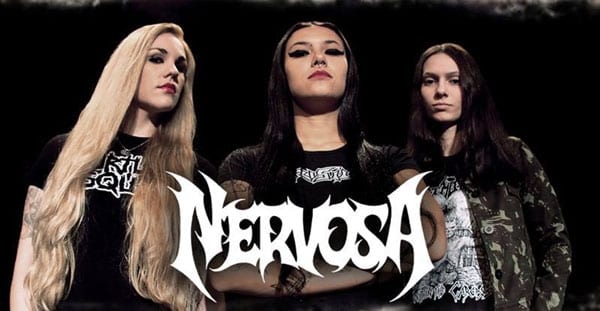 Fernanda Lira (vocal and bass), Prika Amaral (guitar and backing vocals) and Luana Dametto (drums) are already gathered in São Paulo, Brasil, for the recording of the band’s third full-length.

The chosen studio is the already renowned Family Mob Studio, where someBrazilian bands like the legendary Ratos de Porão and Andreas Kisser (Sepultura) and also international bands like Coldplay have already recorded. Other big names who also visited and rehearsed at the studio were Dave Lombardo, King Diamond and Death Dta during recent appearances in Brazil.

The production and recording is in charge of the Argentinian producer Martin Furia, who worked as a sound engineer on some of Nervosa’s European tours, as well as for bands like Destruction and Flotsam & Jetsam, and in studio for Evil Invaders and Sisters of Suffocation, among others.
“I’m very excited to record with these girls I’ve known for a few years now. I want to bring all the energy and aggressiveness they have live for this studio album! “

More details on the album will be announced in the coming weeks.
Follow the whole process through the band’s social networks:
www.facebook.com/femalethrash
www.instagram.com/nervosathrash
twitter.com/nervosathrash