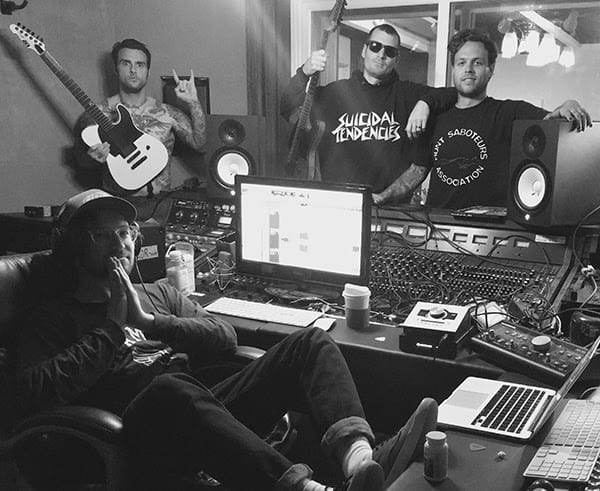 PRESS RELEASE: This year marks the anticipated return of one of hardcore’s most dynamic bands, Stick To Your Guns. The Orange County, CA five-piece has officially entered the studio to record their awaited 6th full-length album, which will be released this coming fall. The band is currently held up at JTM Studios in Granada Hills, CA and is working with producer Derek Hoffman (Silverstein, Boys Night Out), who worked with the band on their previous EP “Better Ash Than Dust”. The record will be mixed and mastered by Will Putney (Every Time I Die, The Amity Affliction, Counterparts).

“It’s that time again where we shove ourselves in a dark room, argue over guitar tones, destroy each other verbally and then pat each other on the back when a good idea sticks. Yep, we’re recording a new full length album. This will be our first full length release on Pure Noise and they have no clue what they’ve got themselves into” Josh James (guitar)

A lot has changed for Stick To Your Guns over the last few years and fans can expect the band to return full-form with the angst and energy of previous releases.

“I’m really looking forward to seeing Derek helps us make an album that feels like an experience instead of just a pile of songs. We’re walking in with around 20 pieces of music that I think listeners will really connect to. Already excited about the release and we haven’t even tracked drums yet” Chris Rawson (guitar)

“It could not be a more opportune time for me to be recording an album. The last two years has been the most challenging time of my life. I have been forced to take inventory of those people in my life and myself. What I ended up finding out was not what I expected. I am not the person I thought I was, or the person I used to be; and I’m trying to get back on track. We have a lot of emotions flying around on this record, but that’s par for the course for STYG. For the first time in a long time, I’m just going into the studio and saying what I need to say and that’s it. I’m not worried about what people want me to say, or how they want me to say it. There are things I need to get off my chest and there are things I need certain people to hear. I hope at the end of all of this I can find that thing that I lost in myself and pick up some new things as well” Jesse Barnett (vocals)