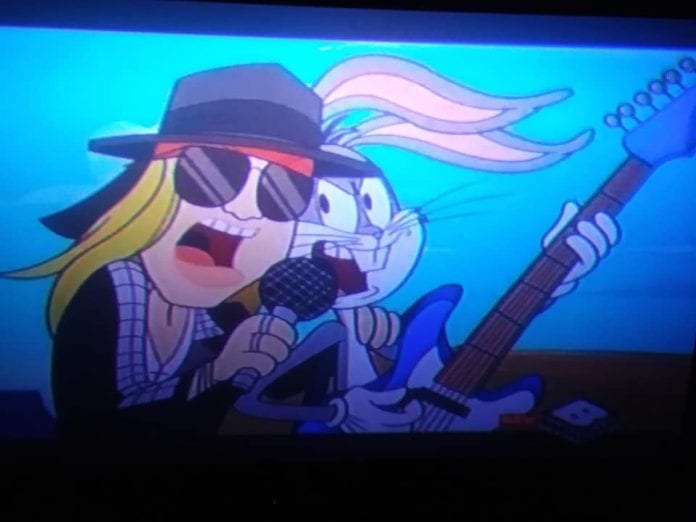 A new song from GUNS N’ ROSES singer Axl Rose may have surfaced in the TV show “New Looney Tunes”, which airs on the Boomerang streaming service.
The episode, which premiered on December 24, features Axl as a character. In the clip called “Armageddon Outta Here, Part Two”, Rose asks Bugs Bunny, Porky Pig and company how to get to the Civic Center, where he is scheduled to perform that night with his band STEEL UNDERPANTS. After the “Looney Tunes” characters tell Axl there is a giant asteroid heading towards earth, he informs them his new speakers can “shake mountains to the ground.” Bugs then proposes that Rose play loud enough to destroy the asteroid before it can land, with the “Looney Tunes” gang serving as his backing band. The group then proceeds to play a song called “Rock The Rock”, ultimately blowing up the asteroid and saving the world.
Although there has been no official confirmation that Axl did, in fact, contribute his talking and singing voice to the “New Looney Tunes”, it definitely sounds like him. Furthermore, it is worth noting that GUNS N’ ROSES has used the “Looney Tunes” theme to open concerts on its “Not In This Lifetime” tour.