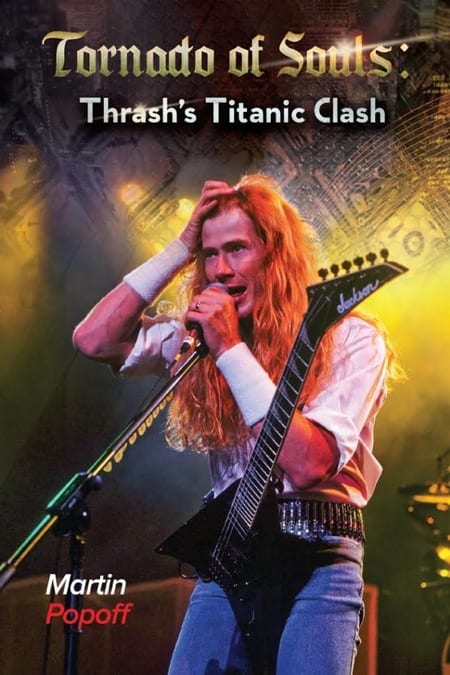 PRESS RELEASE: As the back cover sez… In the final instalment of his thrash trilogy, Martin Popoff looks at the ramp-up from the years 1987, 1988 and 1989, into the momentous pinnacle of the thrash saga, swirled around three key events: the Clash of the Titans tour, the release of Metallica’s self-titled “black album” and the rise of grunge, symbolized by the release of Nirvana’s Nevermind.

In detail and from many angles and many more speakers, Tornado of Souls makes the case that thrash had to reach a peak and then get replaced, because, as our cast explains, it had found itself “painted into a corner.”
It’s all explained by an army of thrashers, label executives and thrashing journalists, who take us through all the great records of the era from the likes of the big four and beyond, up until the fateful fall of 1991, and the fall of thrash as the year winds down. Tornado of Souls therein becomes the culmination of 750 pages of fast an’ loose timeline and quotes coverage, the necessary exclamation mark put upon previous volumes, Hit the Lights: The Birth of Thrash and Caught in a Mosh: The Golden Era of Thrash.

Utilizing his celebrated oral history method—rich with detailed chronological entries to frame the story—Popoff moshes through to 1991, hammering closed this massive undertaking.

Come join Martin, along with dozens of his old school headbanging buddies (including multiple members from thrash’s big four and beyond), as they together tell the tale of thrash’s blow-up years. Metallica, Megadeth, Slayer, Anthrax, Overkill, Testament, Sodom, Kreator, Destruction, Celtic Frost, Pantera, Sacrifice, Razor, Exciter (along with Zazula and Slagel of course!)… they’re all here talking about their own thrash classics and those of their buddies too.