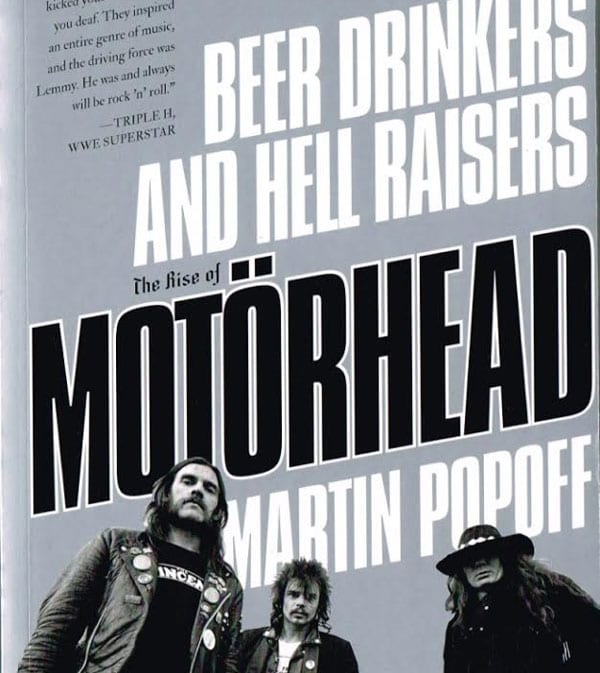 PRESS RELEASE: As the back cover (in part) says, this is the first book to celebrate the classic-era Motörhead lineup of Lemmy Kilmister, Fast Eddie Clarke and Philthy Phil “Animal” Taylor.

Through interviews with all of the principle troublemakers, Martin Popoff, author of 62 books on heavy metal, celebrates, over the course of the book’s action-packed 260 pages the formation of Motörhead in 1975, and, in detail, the records that made them legends, namely Motörhead, Overkill, Bomber, Ace of Spades, No Sleep ‘til Hammersmith and Iron Fist, followed by an epilogue that brings the story up to date.

Eminently quotable, Motörhead come to life in this book as bad luck bad boys incapable of running their lives right, save for Fast Eddie who is charged with holding the thing together against all odds doused in drink and drugs, most notably speed.

Within the context of the book, Popoff also examines the heady heavy metal climate of the times exploding into what was known as the New Wave of Heavy Metal, including Motörhead’s unique position in the scene as both originators and bridge band to the punks, most notably The Damned.

And of course, prominent are the many highlights from Martin’s many chats over the years with Fast Eddie, Phil and Lemmy, the latter two of which died after Martin had finished the manuscript, requiring a last-minute update due to their shocking demises.

For more info go to: www.martinpopoff.com