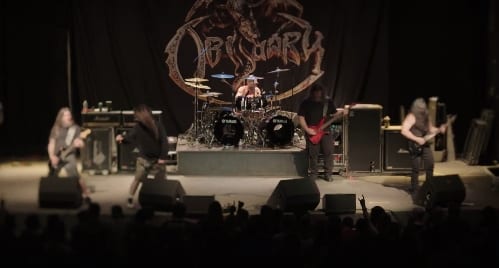 Death metallers from Florida released a new video for the song “Sentence Day” from their recent self-titled album. The video was shot in 4K by Magnetar Studios during one of the bands shows. “We are super excited to bring you guys another music video from the new album. This video was extra fun for the band as we invited James [Pesature of Magnetar] to ride along with us for a couple shows and get onstage/offstage. His entire crew met up with us and filmed a show with multi-camera angles. ‘Sentence Day’ is one of our favorite songs on the album and definitely a fan favorite so we are proud to bring you guys this video. Enjoy!” commented Obituary.