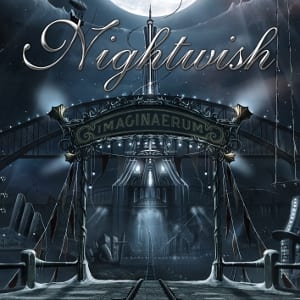 Nightwish’s new and long awaited album was a release much anticipated by both friends and “enemies” of the band. Four yeas has passed since “Dark Passion Play”, the first opus without Tarja behind the mic, and I dare to say that I was proved at least at some points wrong. This has nothing to do with my estimation of that record…my opinion remains the same (I was really fond of the level of those songs). But I feel kinda embarassed by the words of support that I used for Anette’s voice. The truth is that I really liked how her voice suited the overall style of the songs on “Dark Passion Play”. Again, I am not trying to put down or underestimate Anette’s contribution to “Imaginaerum”. The sole person repsonsible for that overall negative feeling that I have for the new album is the person who is behind Nightwish and he is really the “all things Nightwish guy” who makes the decisions, Tuomas Holopainen.
Nightwish has pushed things a little bit too far with “Imaginaerum”. This would be the perfect soundtrack with its huge pompous sound, the inclusion of lots of celtic and folk elements and above all a neverending inspiration. But that’s as far as the story goes..
The result of the above description is that the songs sound “cold” and “foreign” to the ears of teh average metal fan of Nightwish who can’t seem to remember the songs so as to whisper them while walking or sing along with them (I wrote this one before but it’s really important). In addition, the guitars are on the very background, somewhere lost and buried while Anette’s voice is really problematic at least for such a demanding product. It’s a weak, flat and almost non existent –due to the production- voice while Hietala’s male vocals don’t really fit with the album. If you haven’t figured it out by now the vocals are unsuitable for “Imaginaerum”. Songs like “Storytime” and “I Want My Tears Back” are carefully crafted to become hits while the really good “Last Ride of the Day” and “Song of myself” are not sufficient enought to make us say good things about “Imaginaerum”. The words that I used in the presentation of Within Temptation’s “The Heart of Everything» come to mind: “…Nightwish must do something because their reign looks short-lived”. Now, I am certain that…the king is dead, long live the new king!
Those of you who will decide to buy the album, it’s better to pay 2 Euros more and get the two-disc limited edition (with the album in instrumental format…who knows? Maybe, some will prefer this version!).
Is there really a fan of Nightwish out there that doesn’t anticipate the big reunion?