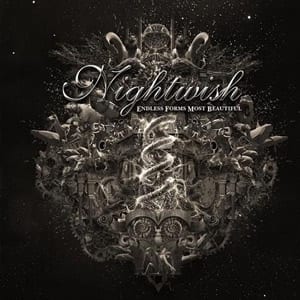 The return of Nightwish is a fact. A return that was being expected with great interest once more, maybe this time with a little more than before.

“Endless Forms Most Beautiful” is the first studio release with the third female singer for the Finn and another new member (the sixth) Troy Donockley, a multipurpose tool for the band on all the instruments never used by the other members of the band.

The truth is that we could hardly imagine what Tuomas had in mind for the succession of the unneeded and chatty “Imaginaerum” and for the failure of the equivalent soundtrack that followed. It seems, from the first spins of “Endless Forms Most Beautiful”, that the mastermind of Nightwish played it safe. He wrote a typical Nightwish album, without taking the slightest risk and judging by the result his choice was wise. After four years and the addition of Floor Jansen, this album sounds a little reserved musically speaking, but it is also tailor made for the singer. Multidimensional, as all their previous albums, with the impressive orchestras dominating once again it is very tight and it’s exactly what the band and Floor herself needed at that point. The way she sings though seems that it limited, as it seems, Hietala’s vocal activities in relation to the past.

If we have to single out which songs from the album we must mention, then the first single “ Elan” is certainly one of them along with “Weak Fantasy” , “Endless Forms Most Beautiful” “ Alpenglow”  and of course “The Greatest Show On Earth” which is the closing song of the album. A 24-minute song divided into five units.

“Endless Forms Most Beautiful” may not be the Finns’ best release up until now, but it is a new beginning for the band and it surely is a good work. It is out in various editions and I would suggest the media book, an edition which contains an extra CD in an instrumental form.