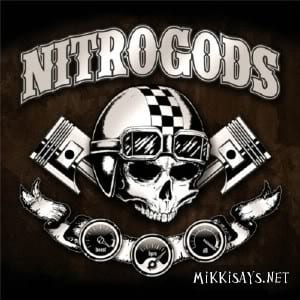 Here we are… power trio, filth, dust, beers, and whiskey, a bassist who sings lead… maybe the microphone is hanging high too… you never know! Even if the vocals might bring Lemmy in mind Nitrogods have way more stuff that are worth mentioning in their debut.
First of all, this might be a debut for the band, but that doesn’t mean these guys are rookies! They are far from that! One glimpse at the video below, and you’ll realize that it’s been some time since these guys first played in a band! Two out of the three, Henny Wolter (guitar, vocals)and Klaus Sperling (drums) have played with Prima Fear and Sinner, while bassist, and singer Oimel Larcher once played in a band called Bastards with “Fast” Eddie Clarke, whose guitar solo prevails on “Wasted In Berin”.
The album also features another guest appearance from Nazareth’s vocalist, Dan McAferty, who adds some more grain on “Whiskey Wonderland”, but I am not sure that you’ll be abe to tell, if you don’t read it in the liner notes.
To cut a long story short, if you enjoy rock’n’roll, where ZZ Top can meet Motorhead, Nitrogods can easily become your new favorite bands. They have an ease putting a lot of different elements into their dirty music, such as harmonica, or even banjo that are combined ideally with their loud guitars and double bass drums. This is a great album that you won’t ever get enough of, and will give you the urge to crank up the volume and party like a rockstar. The only thing that you should be worried about is running out of beer!