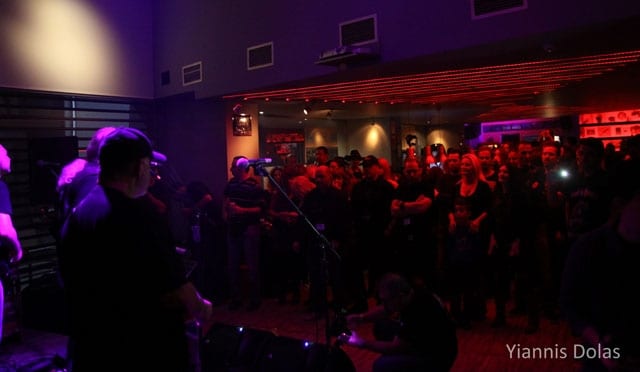 Another No Remorse Festival was closing to an end with the self-titled band, National Acrobats, and Nostos being the attractions of the day at the cozy Harley Davidson Club Hellas at Peristeri.

On a venue that obviously wasn’t built for this kind of live shows, perhaps live shows in general, with no lights, and a setting that wasn’t to sound at all, but with great fun atittude and a lot of people the first band, Nostos, showed up on stage and played a special Lynyrd Skynyrd set. They were great as always with a dream-team lineup consisting of original members Yiannis Anastasakis (vocals/guitar), Kostas Matthioudakis (guitar and some vocals), Grigoris Apostolopoulos (guitar) from Soundtruck, Rich Melville (bass) from Big Ballz, and Lefteris Kafetzis (drums) from Remember Lizzy, Big Ballz, and beyond! They were impressive on “That Smell”, enchanting on “On The Hunt”, and blew us on “Freebird”, while there were some fans dressed up as cowboys and cowgirls that did a southern dancing routine. We are very lucky to have a band like Nostos around that play those songs great, and with the love and respect they deserve, two things that are instantly obvious to whoever is watching their show.

Setlist: Workin’ For MCA, I Ain’t The One, Saturday Night Special, I Know A Little, That Smell, T For Texas, On The Hunt, You Got That Right, Sweet Home Alabama, Freebird 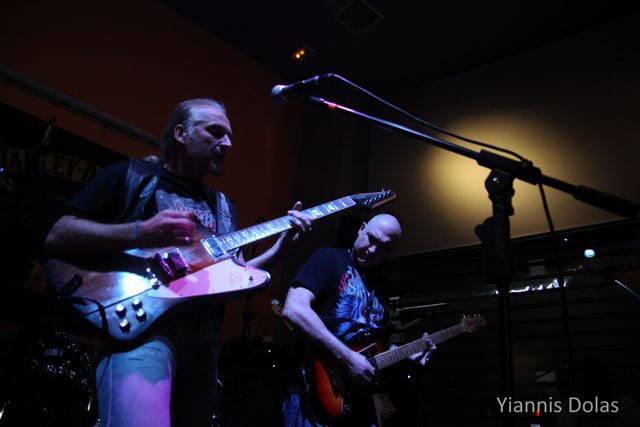 Next up were National Acrobats who are obviously a Black Sabbath tribute band. Having not heard, or seen them before I didn’t know what to expect, but Thanasis Hatziagapis’ presence on guitar was a gurantee of quality for what we were going to witness. Trully, this was a very good tribute with great sound, totally faithful to ’70s era Sabbath, with all members wearing crosses, but vocals being the only flaw, because singer Michael Iosifidis was trying to sing classics like “Iron Man”, “Snowblind”, “Black Sabbath” etc whereas Ozzy wasn’t just singing, or wasn’t singing if you prefer! In some points he was even screaming bringing in mind the sinful Gillan days in the band. To be honest though trying to copy the Madman is no easy task, so we respect the attempt and the general performance of the band that not only made the audience respond, but was responsible for loud cheers, fists in the air and massive sing along. Due to the delay of the show they had to cut “War Pigs” out of their set. 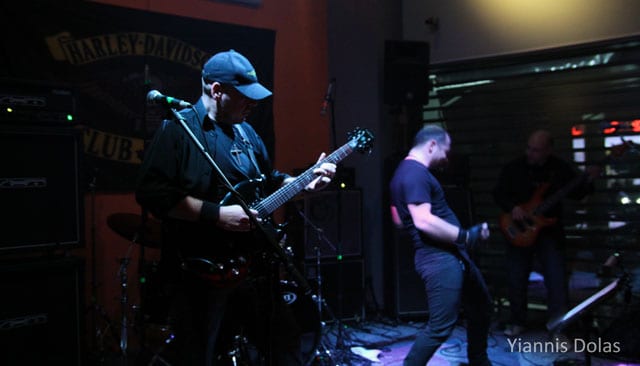 Last but not least, the night’s headliners, No Remorse, who got up on stage just a few minutes after midnight, with a chunk of the audience having left already unfortunately. The killer trio of George Diamantis, Bill “Killer” Kotos, and Stelios Kardamakis pumped adrenaline to remarkable heights with their passion and energy. You couldn’t hear the guitar pretty well, despite the…nuclear heads that were against the walls of the Harley Davidson Club, and as we mentioned earlier that was one of the main problems of the entire night because of the venue. Nevertheless nothing could stop these band’s all out attack in full throttle, and the crowd gave everything they got in response. No Remorse has also a little boost from… Jack Daniels as one of Harley Davidson riders poured some in the guys’ mouths. Of course, there is no party in bikers joint without a bike, so at one point a beautiful bike entered the club with its engine roaring in front of No Remorse. The show was completed with the usual holocaust on “Overkill” with the band doubling the song’s tempo, while they also pulled out of the bag their old trick of one-of-the-guys-getts-off-the-stage-playing-and-gets-out-of-the-club-to-take-a-walk-around-the-neighborhood-while-the-others-inside-keep-playing!
Setlist: Iron Fist, The Chase Is Better Than The Catch, Metropolis, Bomber, Brotherhood Of Man, Snaggletooth, Going To Brazil, Rock’n’Roll, Orgamsmatron, Killed By Death, Ace Of Spades, Overkill

That’s how the third day of No Remorse V was over, adding up to a festival that has every time something new to offer to its audience. Tribute bands attract serious interest in Greece and there is plenty of bands that do a good job. See you next time!
Yiannis Dolas
Click here for more photos! 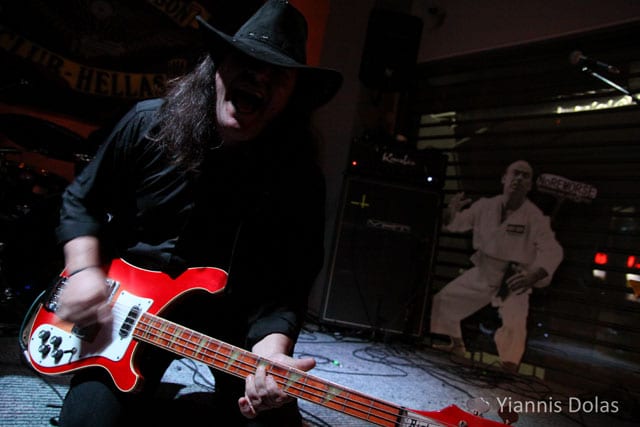