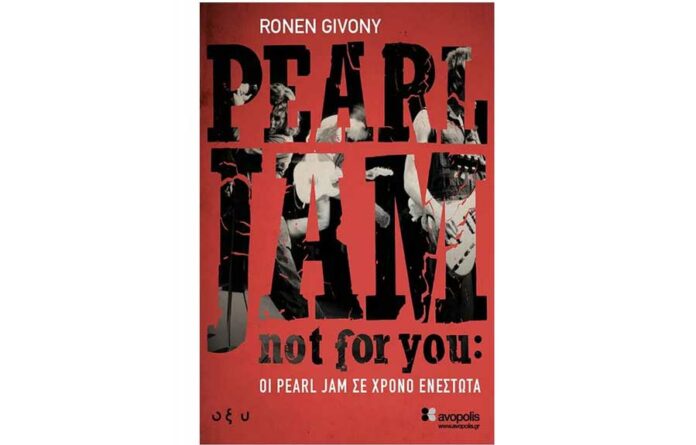 I must say that I was particularly wary of this book, or more precisely about the Greek version of the book. After all, these Greek editions are not known for good translations, but I have to admit that the overall rendering of the English text for “Not For You” was satisfactory despite some few mistakes. I had read many reviews of “Not For You” before I bought it, and the vast majority of them were more than positive. And the coolest thing was that they came mostly from die-hard Pearl Jam fans. This was good.

Ronen Givony is not just a “die-hard fan” but a Pearl Jam collector who has spent countless hours listening to and watching the band’s concerts and various bootlegs on YouTube, keeping track of which tracks were played the most and where while he doesn’t fail to point down many of Vedder’s lines during those legendary concerts. Also, he writes in a very layered and comprehensible way with humor and sarcasm as his main feature (both of which come through in the Greek text) but at the same time he is critical where he should be…in other words, he doesn’t praise everything that Pearl Jam does or has done in the past. That’s good too.

The most important events of the socio-political context of the time are highlighted in direct relation to Pearl Jam’s career – after all, we are talking about a band that is really sensitive when it comes down to political and social issues – thus we get an even better view on Pearl Jam’s career. I certainly disagree on several points with Givony’s views but that doesn’t matter at all since the author has arguments and a thorough opinion. For example, as much as Givony insists, “No Code” is not the compositional pinnacle of Pearl Jam, nor is Jack Irons the best drummer that ever graced Pearl Jam’s drum stool. It is also worth noting that almost 2/3 of the book focuses on the period from “Ten” to “Vitalogy”…the glory days of Pearl Jam. That’s good…once again.

What remains at the end of the day is that Pearl Jam is a cultural phenomenon that actually “broke” the narrow boundaries of music and crossed over into those of the so-called “pop culture”. I wholeheartedly recommend the original English version and, with minimal reservations, the Greek rendering by Oxy Publications.