The change of lineup and sound marked a new beginning for Null’O’Zero that went through a phase of regrouping and identity searching. Drummer Lefteris Morros talks about the band’s transformation, influences, the debut album, heavy metal as well as Christos Dantis, a popular Greek singer who has nothing to do with the heavier sound of music whatsoever… Interview: Yiannis Dolas

Rockpages.gr: How did your band name come up? 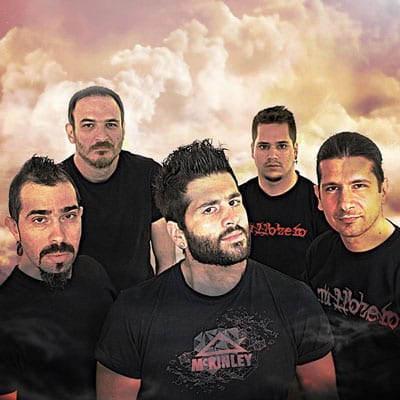 Lefteris Moros: First of all, let’s talk about its meaning! “Null’o’Zero means nothing from zero and has to do with our philosophy and way of thinking. It’s like saying null o zero. Since the band name is its identity as well we wanted to send a message with it. It’s a message that calls you to action and will tell you that nothing is achieved without pain. When you do nothing, then you are getting zero. We honor our name with hard rock and that’s obvious from the band’s feats so far. Therefore, that’s the best name possible for what we are doing.
Rockpages.gr: The band started back in 2012 but went through several changes. How hard is it to replace main members and find suitable replacements, both as persons and players?

Lefteris Moros: Well, the change as one actually. We went through a phase of dismantling so that we could get things going the way we wanted them. Through some situations that we went through we realized that changing singer was a one way street. Also, we decided to add an extra guitarist so that our musical themes could be heard and performed as they should.
The truth is that this took us a long time leaving the band inactive for one year. As far as the second part of the question, finding the right replacements who are capable of playing our songs well enough, but it’s also even more difficult to find people that will love what you are doing and leave their egos behind in favor of the band.

Rockpages.gr: So, your new line up is a new start for you guys?

Lefteris Moros: Of course it is a new beginning, since we brought the band where we wanted! With out first band we were leaning more towards thrash, while now we are blending in different influences and we’ve came up with a special sound that can’t be identified easily.

Rockpages.gr: “Enemy Within”, although quite modern style-wise has several nods to the old school metal. It reminded me of Annihilator, Armored Saint, even Megadeth. What’s the best cross between new and old in heavy metal?

Lefteris Moros: Heavy Metal is deeply rooted into the past decades. Of course, there are new genres based in metal that leading quite different styles. We have remained on the classic heavy/thrash sound as a main direction, but we are open and we are not trying to copy the sound and playing of past eras. What we play is 2015 heavy thrash metal. 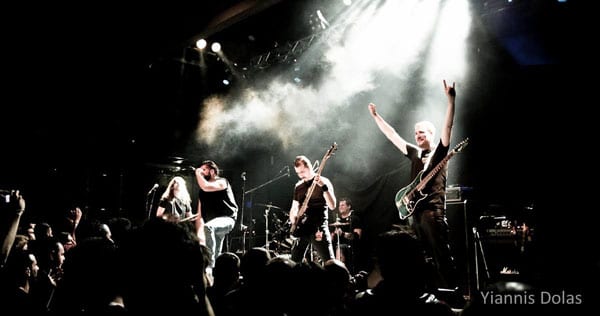 Rockpages.gr: In already weird times and within a dangerous atmosphere after what happened in France, and not just that, who would you say that the “Enemy Within” could be? Where did you get the inspiration for that title, and for the album’s themes? 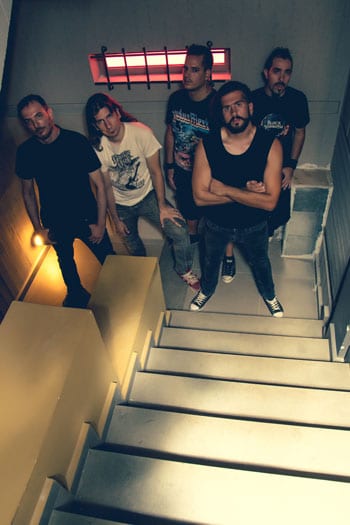 Lefteris Moros: We are indeed living in weird times and what’s happening are taking huge dimensions. You can apply “Enemy Within” in several issues and situations. It’s and will be relevant. Both the album’s themes as well as a total and the title was inspired by our everyday life and stuff that happens and influences us, no matter what these are. The lyrics are deep they are not shallow and that’s why our listeners can identify with the songs. Now, if we take it to a personal level, “Enemy Within” can be your bad self that we are all suppressing in order to belong to our society and survive. While it’s locked down inside of us it gets out at one point and dominates us. That’s when we put aside our feelings (look at the locked heart in the cover) and we don’t act ourselves anymore. The good thing is that the heart is locked in a lantern, so that means that when the “Enemy Within” takes control the heart will be the light that will show us how to deal and face our bad self!

Rockpages.gr: There’s a video on YouTube with Chris Dantis getting ready to record backing vocals for your album. Did that actually happen?

Lefteris Moros: Yes, that’s true. Famous singer/song writer Christos Dantis participated as a guest on our song “Unleashed By Fire”, which was our first video. He is a great man and artist and he was interested for our band, so we were glad to work with him. He did a really great job on backing vocals and helped us make our chorus even more melodic.

Rockpages.gr: The songs I think stand out in the album are: “Embrace Your Fear”, “King Without A Crown” and “Unleashed By Fire”, can you tell us a bit about them?

Lefteris Moros: I agree with you, i think these are the songs people will love! Of course we are sure that the more you listen to the album the more you will connect with the rest of the songs, because every one of them has something special. In a few words, I’d say that “Embrace The Fear” is a powerful, up lifting heavy metal song with a great bridge and chorus and a closing based on classic metal. “King Witout A Crown” is a song with several changes, different time signatures, very technical and with awesome vocal lines. Finally, “Unleashed By Fire” is aggressive with staccato riffs, a very melodic chorus and a closing truly “unleashed by fire”!

Rockpages.gr: What are your influences?

Lefteris Moros: As a band we are influenced by the American scene. Mostly heavy and thrash metal. We are equally influenced by more modern American bands like Machine Head, Disturbed etc. Individually we all have our personal influences which makes Null’o’zero drawing inspiration by the entire hard music spectrum!

Rockpages.gr: You made your first steps in music through a musical contest. Do you think that taking part in contests like that helps bands and artists, no matter what the result may be, and how? 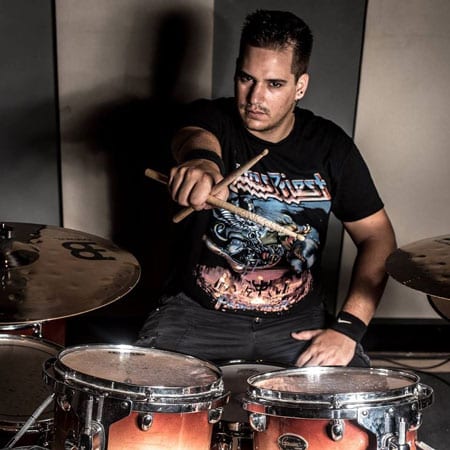 Lefteris Moros: The truth is that for a newborn band like us winning a contest gave us a big push and that’s because being totally new we didn’t have any connection to book a live show. The good thing about that contest was that we managed to play 4 or 5 shows within 3 months. Since we won we took advantage of our prize, which was 70 hours of recording. That’s how we made out first EP. That’s one side of the coin. On the other had all those could have happened in under circumstances as well. Even if we haven’t participated in the contest, or if we hadn’t won, would things go a different way? Of course not! We would have the same outcome, because that’s what we wanted in the first place. So, a contest is something very temporary and can’t up the level of your quality and in my opinion it doesn’t have any worth if a band has guts and works. One way or another you will have the same results, so what path you follow it’s your choice.

Rockpages.gr: Within a Greek scene that has a variety of genres, what would you say that are the weapons for a band to stand out and establish itself?

Lefteris Moros: It’s heart and soul! There are several examples. Gus G, Sakis Tolis, George Kollias, Dimitris Liapakis, Marios Iliopoulos, all these people took it beyond. They achieved that with long hours of studying and hard work. And there are loads of bands that work with love and devotion, despite the hardships that we all face nowadays, like Innerwish, Diviner, Endomain, Wardrum, Battleroar and there is loads more…

Rockpages.gr: You belong to the roster of an up and coming Greek record company. How important is the role of the record company in a time and age where the music industry is in such decline?

Lefteris Moros: We are part of the roster of a record company that works like big companies abroad! A company that loves and respects the artist and makes the right moves to push forward its roster. That’s great! That can be important. It’s not like our company releases 500 copies of the album and doesn’t give a shit! It’s important if you want to go pro to work with professionals that have the knowledge.
The decline of the record company is of course a fact, but when you see serious professional moves with perspective I think that it positive, whether we are talking about the band, or the label itself. What’s left is the work you do to be appraised. As long as there is demand there will be offer, otherwise you go downhill and there is no turning back from that.

Rockpages.gr: What are your ambitions for the band?

Lefteris Moros: To play a lot of shows, which is something that gives us energy and it’s a good time. To receive people’s love and know that our sacrifices are not for nothing. Also, to get good support slots, tour in Greece and abroad and to manage to achieve a continuous good quality discography. 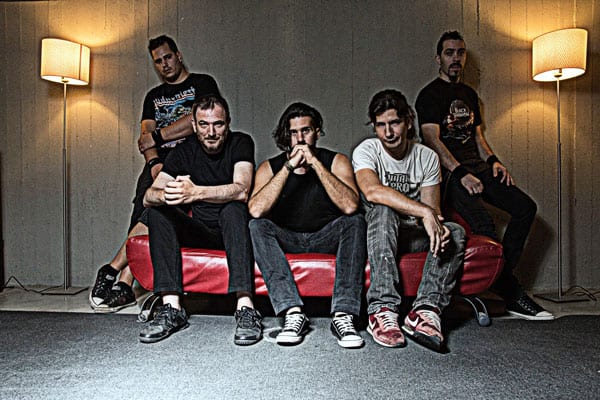