Oceans Of Slumber gave their first headline show outside of the US, with the Greek audience being the lucky one. So we couldn’t miss the opportunity to have a talk with them. Rockpages sat with Dobber Beverly (drums) and Cammie Gilbert (vocals), a few hours before they hit the stage, for an absolutely delightful conversation. The best parts are here for you to enjoy. You can also check out the video below! Interview: George Terzakis

Rockpages.gr: Let’s start from the beginning. You were formed in 2011. Who are the founding members?

Rockpages.gr: Your first release was an amazing album, “Aetherial”. How did this sound come up? Did you planned it or it just happened?

Dobber Beverly: It just happened. When started playing we were looking to do something more close to Finnish style like straight-forward dark metal, like Charon, Sentenced, stuff like that. So I was on work one day, Sean called me and said “we don’t have to do all that, we can incorporate these things and just see what happens”. “Aetherial” was a testing ground. It was a way for us to feel each other out and see what the songwriting process between us would be. And that was incredibly fluent and easy, which is awesome, so we found that we could write together and create music easily together. 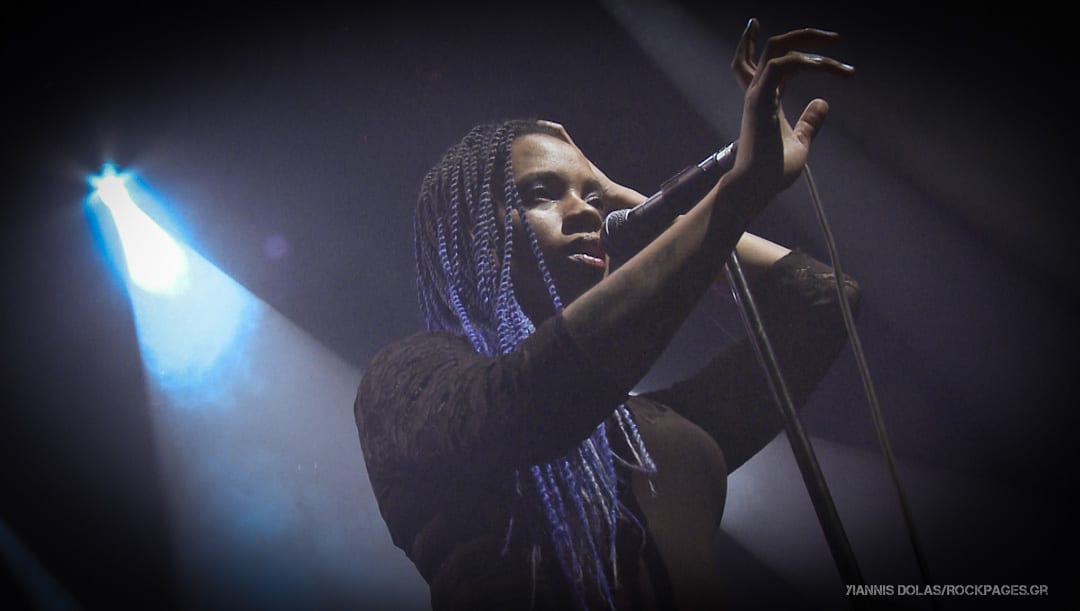 Rockpage.gr: Why couldn’t you find a label for it?

Dobber Beverly: Because of the nature of it. We released it ourselves too early, but we couldn’t shop it. I had connections through my former bands through extreme metal labels, but we weren’t just an extreme metal band. It was like Faith No More meets death metal.

Rockpages.gr: It was too progressive for the death metal fans?

Dobber Beverly: It was a cool record, it got really good reviews and we thought that we were onto something. The same problem happened when we were shopping “Winter” around, this was really good but we didn’t know how to market this.

Rockpages.gr: What about the contract with Century Media? Did they find you or did you find them?

Dobber Beverly: We’ve gone through some major labels and gotten pretty far into the process and it just didn’t happen. Everyone said that it was really good but they were scared to take a risk on us, they thought they couldn’t market it. And then the main guy from CM in the US wanted to sign us and he guaranteed that we will do well. And fast forwarding to now, he was right. They are amazing and they want us to succeed. 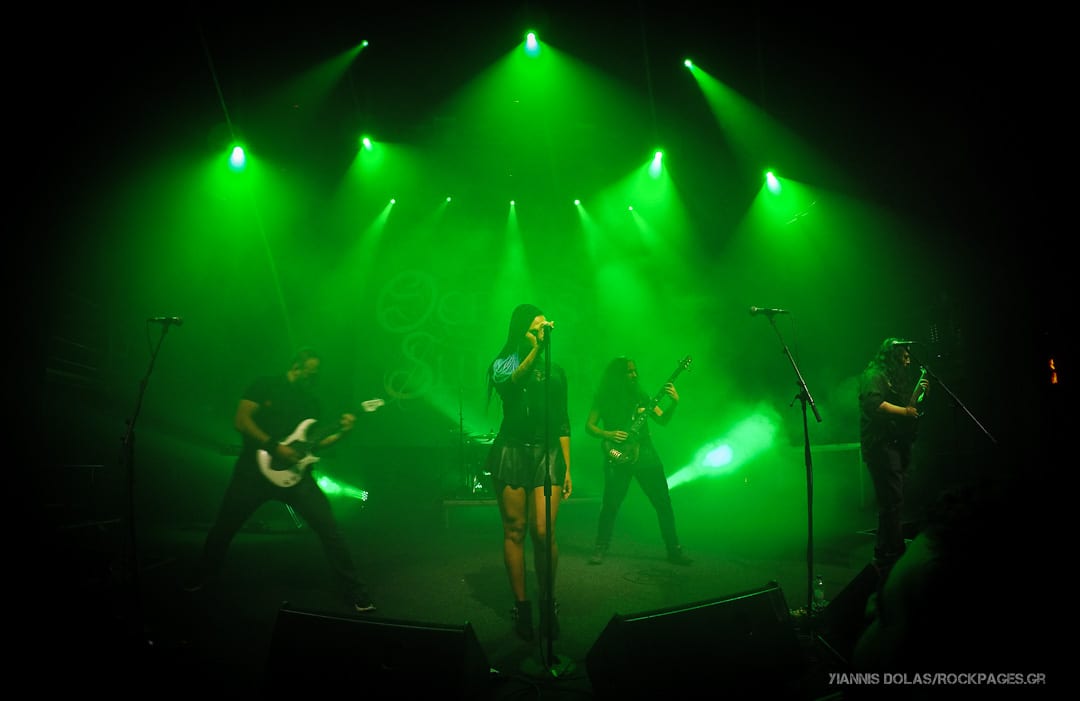 Rockpages.gr: After that your new amazing singer entered the band. You said that from the first time you wanted to have a female singer. Is this what you had in mind? How did you meet? And the change in your sound was something planned or it just happened?

Dobber Beverly: It was natural evolution. We finished “Winter” before Cammie was in the band. Everything except the vocals was ready. And she happened to be there at the exact moment when we needed a singer.

Rockpages.gr: Did they gave you any directions on how to sing or you just heard the songs and did what you felt?

Cammie Gilbert: They said “take them, put whatever you want into them”. Everything came together symbiotically and smoothly. It wasn’t a bumpy transition.

Rockpages.gr: Do all the different influences of the members of the band happen to fit in naturally? 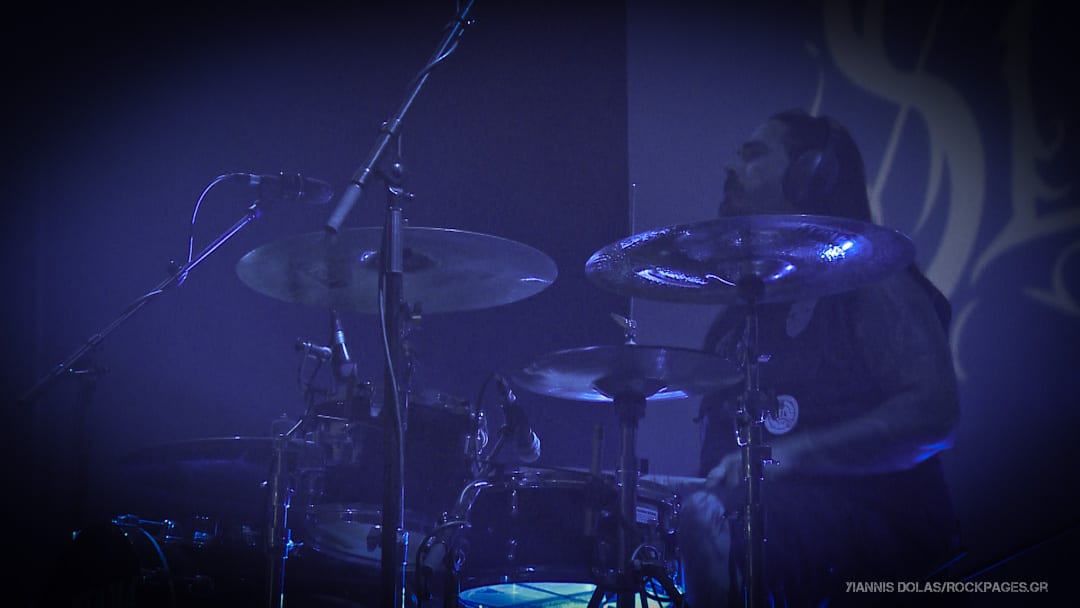 Rokcpages.gr: And what happened after the release of the album? What were the reviews from critics and fans?

Cammie Gilbert: We had a very good feedback, expanded and gone way across the world, I mean we’re here now. I hadn’t really thought about where we were going, I liked and it meant a lot to me and anyone who worked on it but seeing that it means so much to other people was absolutely amazing and the best thing you can wish for.

Rockpages.gr: It was above your expectations?

Cammie Gilbert: I tried not to have any expectations at first, but it was absolutely above them.

Dobber Beverly: With “Winter” we knew we had something that we liked a lot and it was special to us but to see everybody else get into it was a complete surprise.

Rockpages.gr: After that, it was your first tour in North America with Evergrey, Voyager and Borealis. Something completely different for everyone. How was that experience?

Dobber Beverly: It was awesome. You got to see three additional operating systems in a tour and you learn a lot. I have toured in the past but with death metal and grindcore bands but that was completely different. Myself and Anthony have toured a lot in the past and had a lot of experience, but it was the first time for the rest of the band. 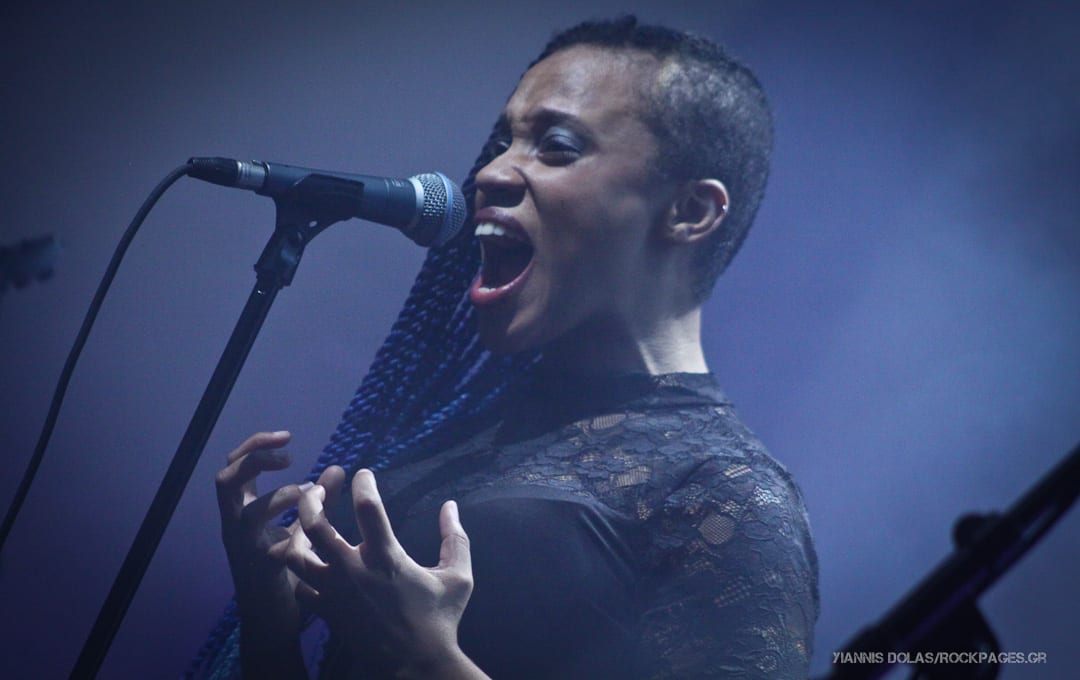 Rockpages.gr: And how about the audience? Did they know you?

Dobber Beverly: We had a small number of followers and we picked up a few stragglers along the way. Because of it being a four band tour it was basically a kick in the teeth. We’ll go back in the US in February the next year and get on two different tours with famous metal bands that I can’t name right now.

Rockpages.gr: Your first tour outside the US was with My Dying Bride. How different it was for you?

Dobber Beverly: It was absolutely amazing. The production level of a tour like that was over the top.

Cammie Gilbert: That was my first European tour. It was absolutely different; the level of efficiency was phenomenal. Seeing and learning from that atmosphere they create on stage is invaluable. A very emotional tour.

Rockpages.gr: Any difference between the US and European audience?

Cammie Gilbert: Big difference. I feel like there’s more respect here for the music and the bands.

Rockpages.gr: And here you are. This is your first headline show outside of the US. Did anyone else try to book you for a single night?

Dobber Beverly: Yes, we had some offers but we couldn’t do anything because we are on a tour now with Enslaved and there’s a very strict program. We plan on coming again next year for the summer festivals and then probably we’ll be doing our own headlining tour. 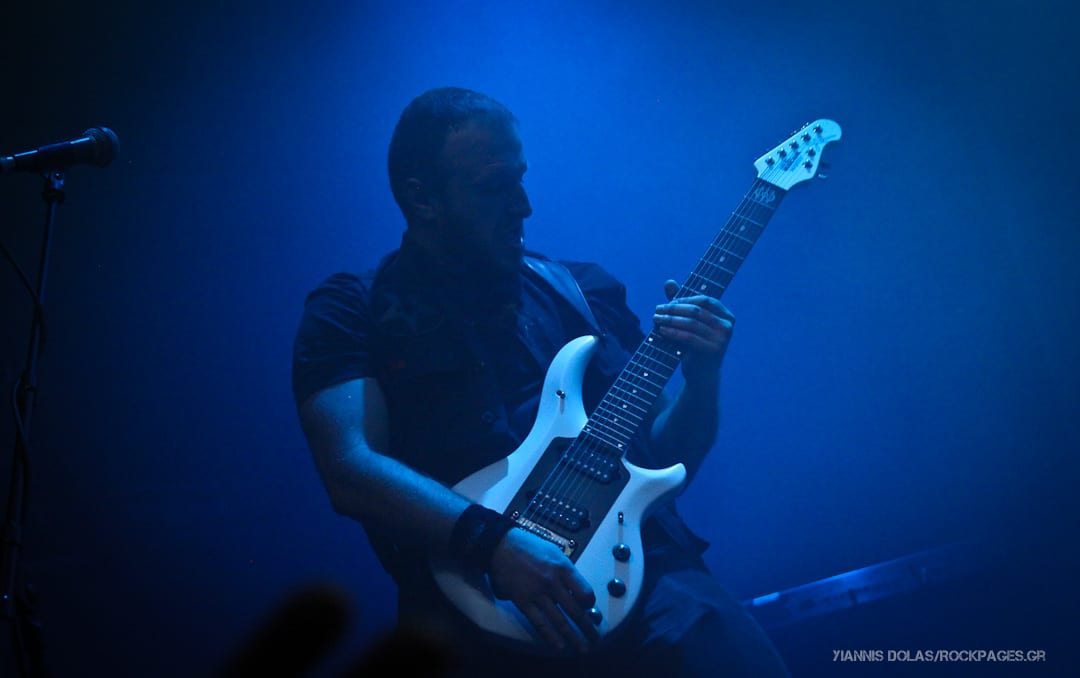 Rockpages.gr: Do you know about the Greek metal scene?

Dobber Beverly: Yes, I like the death metal bands like Inveracity, Mortal Torment and Dead Congregation. Of course there are Rotting Christ, Septic Flesh and Necromantia who started everything. I’m into the bands here, I’m into the culture and everything. I like Greece, I wanted to come here for about 30 years.

Rockpages.gr: After this show, you will resume your tour with Enslaved. Plans for the future? Except the US tour that you mentioned before.

Dobber Beverly: Hopefully by next fall or winter we will be in the studio finishing our new record.

Rockpages.gr: Have your written any new songs?

Dobber Beverly: We’ve got about half of it. Cammie is learning cello in order to play it in some songs. And we’re also shifting gears in visual arts. We’re into the idea of constructing scenery with professional photographers.

Rockpages.gr: Big plans for the future.

Dobber Beverly: Yes, because you don’t know what will happen until the next record. We can die, so I want to try everything I can. We’ll have guest vocalists like Tom Englund from Evergrey and I’m working to get Kristoffer Rygg from Ulver.

Rockpages.gr: So what can we expect from the new album, compared to “Winter”?

Dobber Beverly: The new record is going to top “Winter” in terms of grandiose, spectrum, audio, everything about it. It’s a lot darker and sadder. We might have less heavy vocals or we might have more brutal vocals, who knows? We’ve also got another full death/black metal track.

Dobber Beverly: At first, thanks for the reception here. We’re incredibly happy about it. If you want to see a band who gives everything on stage, come see Oceans Of Slumber because we are an incredibly emotional and engaging band who absolutely love what we do. 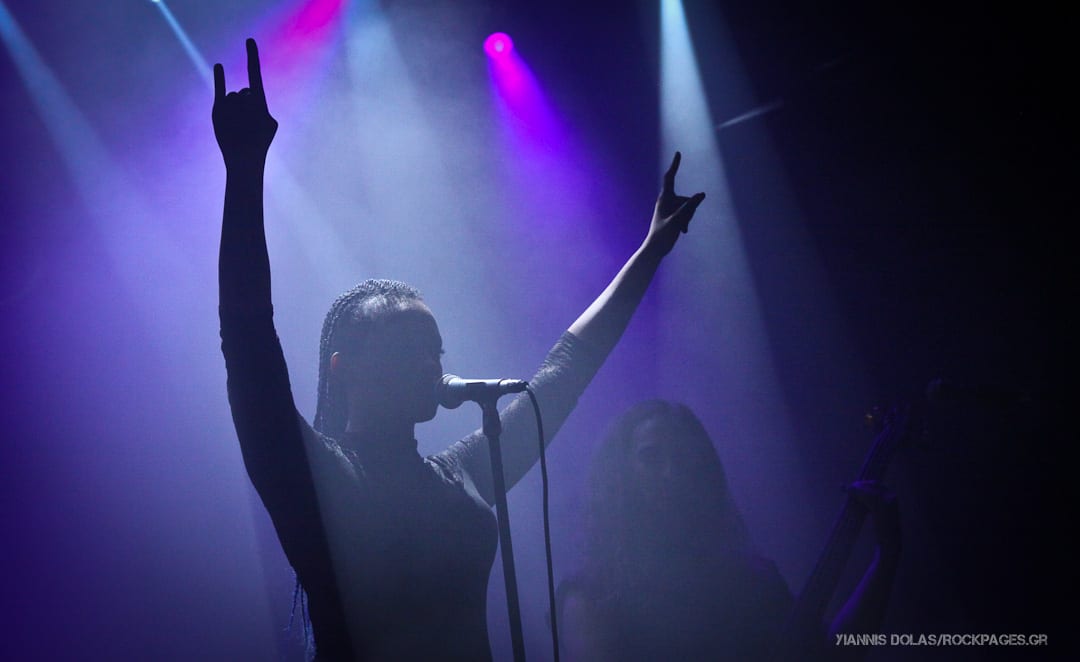