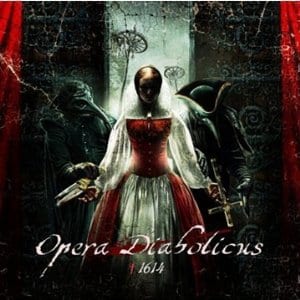 The year of our Lemmy 1614 is the very year Pocahontas gets married and El Greco (Domenico Theotokopoulos) departs to the other side… So far there is no other indication that 1614 is related with 1327, however the album creators, musician/composer David Grimoire and libretto maker Adrian de Crow beg to differ. The two of them met during a “The name of the rose” play, in Gothenburg, almost five years ago and Umberto Eco’s story (“located” in 1327) made them meet again, talk it over and agree that it would be a cool idea to try and adapt the novel musically. They began transforming the book into one mixture of theatrical musicmaking; the formation of Opera Diabolicus is fading in… Some splendid musicians were called to participate…
Snowy Shaw (King Diamond, Mercyful Fate, Notre Dame, Therion, Dimmu Borgir), Mats Levén (Krux, Therion), Niklas Isfeldt (Dream Evil), Jake E (Amaranthe, Dreamland) and Miss Camilla Alisander-Ason, sharing every vocal part on the album. Naturally, Snowy is also taking care of the drum issues in there and you all know what a drum-blaster this guy can really become. He’s a perfectly trained musician, turning drumming into a heavenly recital throughout the album. On the other hand, it would be impossible to avoid focusing on the singers, amazing all of them, featuring Mats Leven as their striker.
Horrorphonic Metal style; elements of King Diamond (tracks motif, the whole recipe and the fact that Andy LaRocque is producing and mixing concur) and Kamelot and even rougher and more berserk stuff. The dynamic duo we mentioned before, has managed to create an atmosphere one could describe as “Phantom of the opera meets Stephen King” or something like that… Songs huge in duration, three of the album tracks are ten minutes long, the band shot a video for one of them (Blood Countess Bathory), which is basically a lil’ movie.
It surely is an exceptional attempt, made by a bunch of brilliant individuals, fans of Dark Rock/Metal will love it as well as Goth and melody fans. Yep, there also harsh voc in here, so I guess Black/Death Metal fans will love it, too.