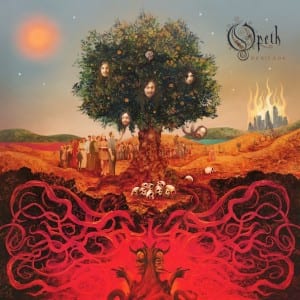 Opeth is a band that can be difficulty labeled. Mostly because of Mike Akerfeldt’s growls most of the people labeled them as death metal. But the death metal diehard fans didn’t like Opeth. On the other hand, prog rock fans have a difficult time listening to Opeth ‘cause of the black metal vocals. So, we can say that Opeth fans are really unique portion of the prog fans and the death metal fans.

Secondly, Mike Akerfeldt stated that he was listening to a lot of Alice Cooper when he was writing the new material. In such statements you can only remain cautious. Alice Cooper has limited to zero connection with either prog or death but… he is Alice Cooper after all.

Listening to “Heritage” I think that Opeth took the positives of “Damnation”, the positives of Alice Cooper (and of the 60s-70s in general) and the positives of some of their older albums like “Blackwater Park” and wrote an excellent record. The album is not filled with soft and pop sounds. On the contrary, the album is hard and loud but it never turns into metal. To be more specific the sound is really complex. Its 60s-70s prog rock, its hard rock, its jazz, it has some folk elements. The good thing is that none of the above elements is overused.

Musically, this album might be the best thing that Opeth have ever released. The bass lines are exceptional, the riffs are hard, the keyboards are really dominant at places, the drums are fantastic and Akerfeldt shows that he can sing something hard without growls.

“Heritage” has Deep Purple and Jethro Tull elements but the classic Opeth elements are still there. When the song reaches its peak of energy it dives into psychedelic-melancholic keyboards.

This new Opeth album will disappoint the headbangers and the black metal vocal fans, but those that have an open mind about music will love the new direction the band is heading. And I think that their next albums will be in the same direction.