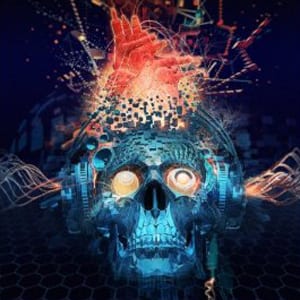 A sensational album from a band that most likely will go down in music history as the one that released the monumental hit single “Last Resort” (with the familiar Maiden-esque guitar riff) back in the beginning of the millennium. The truth is quite different, though. Papa Roach is one of the finest American outfits of the past decade that has given the world at least two classic records (“Infest”, “Lovehatetragedy”). Yes, I agree…their last couple of records were not for sure up to par as they openly flirted with the radio friendly, pop sound but “The Connection” restores the order!
Papa Roach with the brand new offering shows clearly that they wanna embrace their past by combining it with their newer sounds. It is actually an harmonic marriage of nu metal, modern rock and pop with the ever catchy vocals of Shaddix. “Still Swingin”, “Silence is the Enemy” and “Leader of the Broken Hearts” are the stand out tracks of a bunch of remarkable songs.
“The Connection” can be easily regarded as one of the best albums of the year and surely in the Top 3 records of an American Modern Rock Band for the year 2012.
Highlight: The production was handled by the esteemed James Michael (SIXX: AM).