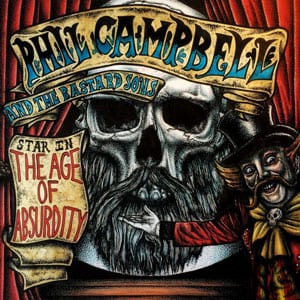 Only Neil Starr (vocals) would respond differently to the traditional provincial town’s question: “Who is your father?” Phil Campbell and the bastard sons is family business, consisting of Tyla, Todd, and Dane on guitar, bass, and drums respectively, the sons of the great guitarist. After the death of Fast Eddie Clark, Phil Campbell is the oldest alive member of Motorhead. He has been offering his services ever since 1984 and after, to the top Rock ‘n’ Roll band on the planet. The band of his sons, led by him, could not play anything else than particularly energetic, blistering rock ‘n’ roll with modern production. The style is reminiscent of Motorhead’s first releases, before his own time, and up to the middle, the album progresses loudly, with the drumming standing out. Really loud are the tracks “Freak Show” and “Gypsy Kiss” (100% Motorhead-punk). But the best is yet to come, “Get on your knees” and “High Rule” are great fast tracks, and two epics consisting the word “Dark” in their title (incidental?). “Dark Days” is a mid tempo, bluesy track with the harmonica defining the result, while “Into the Dark” brought Fastway to my mind, the band with which Fast Eddie Clark continued in the 80’s.

The disc will divide fans. Catchy production, Neil’s alternative vocals, can be considered from a part of the audience as a commercial move. I personally love that Phil Campbell is looking ahead, and I think the world would be better place if every family was rocking this way!