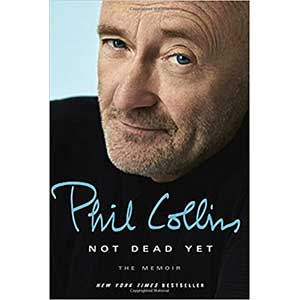 I can only think of two cases where an artist went on to achieve greater success with his solo career compared to the one that he enjoyed as a band member. The first one is Ozzy Osbourne…the other is definitely Phil Collins. I am sure that there is not a single person out there who thinks that Phil’s path as a solo artist was inferior compared to the one with Genesis (which was of course impressive). I was anxiously awaiting for many years this autobiography by Phil Collins not only because he is one of my favorite artists but especially due to the fact that he still remains one of the most likeable personalities in the music business.

“Not Dead Yet”, apart from the obvious message in the title, displays all the classic elements of a typical autobiography with the timeline of the narration following a linear pattern; that is from the childhood years up to the present day. But there is a definite and most remarkable differential point: Collins’ way of sharing the events of his life is being presented in such a vivid and typically British humor that you literally can’t stop smiling and even laughing with each paragraph. In addition, I really liked that Phil Collins lived and breathed for music having seen all the monsters of rock during their very early stages of their career and later on becoming friends with most of them as a successful musician.

Right from the early days with Genesis up to the golden 80s and the more emotional 90s, Phil’s life had definitely its ups and downs (three divorces and an alcohol addiction that nearly cost his life are things that surely cannot and should not pass unnoticed). But the truth is that Collins is still here albeit with a few inner scars to remind him of those nasty days. He gave the world some of the most beloved and timeless songs of all time…by the way, “In The Air Tonight” was written for his first wife and it wasn’t inspired by the witnessing of a murder…that’s an urban legend, although a really good one. All in all, “Not Dead Yet” is one of the finest autobiographies I’ve ever read and needless to say that I highly recommend it!