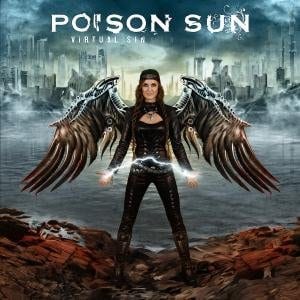 Poison Sun is a brand new band formed by Herman and Martina Frank in Hannover and “Virtual Sin” is their debut album. Herman Frank’s name surely sounds familiar to all the metal fans around the world as he is the lead guitarist of the German supergroup of Accept. His wife, Martina, is an experienced singer with many collaborations in such bands as UFO, Jane and many others. The quartet is completed by Florian Schönweitz and Stefan Hammer.
“Virtual Sin” is a superb sample of European heavy metal with melodic guitars, catchy and up tempo choruses and traditional bridges that remind of the golden for the genre 80s era. If we had to use just one word for Martina Frank, that would be “senasational”! Her voice is raspy, deep and thick thus bringing in mind Jutta and Doro just to name a couple of similar –more or less- female artists. Herman Frank is storming on guitar while we must point out that there can be found various power metal elements in the songs.
All in all, I believe that we should definitely pay attention to “Virtual Sin” and watch out for Poison Sun as I truly believe that this is the first step of a long and hopeful career.
Highlight: The cover version of the pop hit “Excited” (originally by Pointer Sisters) is fantastic!