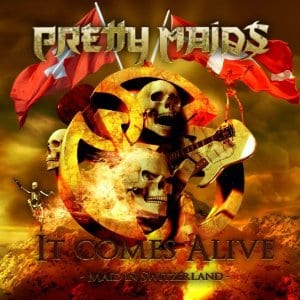 Pretty Maids celebrate 30 years in the musical forefront and apart from the fact that it makes us consider that we are getting older at the same time it makes us really happy because a band from such a small country as Denmark had managed to endure in the insatiable realm of the music business. In the frame of their 30th celebration, Pretty Maids release a live album (recorded in Switzerland) which is actually the first official release that combines the audio with visual aspect of a show (thus meaning CD+DVD).
The…main menu of the album –that is, the audio part- is absolutely satisfying as it includes more than 20 songs by the Danish outfit covering the band’s entire career. The sound is crystal clear (yet raw and in your face), Pretty Maids flawless and energetic while the crowd is up front in the final mix…all in all, you are taken right into the middle of the concert. Naturally, the big hits can be found in the second disc…so, we are treated with timeless songs like “Rodeo”, “Love Games”, “Back To Back”, “Please Don’t Leave Me”, “Little Drops of Heaven”, “Future World” and many others.
“It Comes Alive” could also function as a “best-of” compilation and if I had to mention a negative point of the release that would be the below par rendition of the excellent song “Savage Heart”. The truth is that I prefer the studio version.
Highlight: When we got the promo version of this release, we didn’t receive the DVD…so, we are waiting like yourselves for that one, too.