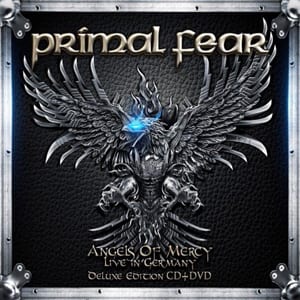 It’s hard to believe but it’s been almost 20 years since Primal Fear started their journey in the metal world and they are already counting 11 studio albums! It seems like yesterday when the official release was made by Nuclear Blast regarding the band’s debut albums and that was back in 1998…surely time flies by! As it is customary for the majority of the German bands out there, the work ethic comes first and it is of high standards and Primal Fear is a stellar example to that rule. I guess the title “Angels of Mercy – Live In Germany” says it all but let’s see a few more details regarding this live album by the German sextet.

As it was expected, there is a clear emphasis on Primal Fear’s latest album “Rulebreaker” as the fans are treated with no less than 4 songs (the title track, “In Metal We Trust”, “Angels Of Mercy” and “The End Is Near”). We would have loved to listen to a live version of the brilliant “Bullets & Tears”…maybe next time! The sound is crystal clear and the overall performance by the guys is as always flawless. Especially Ralf Scheeper’s voice is as dynamic as ever and he reaches even the most demanding notes. Truth be told here; maybe a more balanced set list could have been ideal as there is only a handful of songs from the first four classic records but I guess that had to do with the fact that there we included in past live releases like “The History of Fear” and “Live In The USA”.

Naturally, this is an album aimed mainly at the hardcore fan base of Primal Fear although we must underline that “Angels of Mercy – Live in Germany” is a pure heavy metal live album with no overdubs in sight and it is definitely a worthy addition for every metal fan around the world. After all, Primal Fear never failed us, right?

Highlight: The DVD/Blu-ray format includes an extra song (“Running In The Dust”).