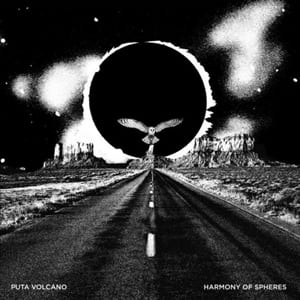 It is a fact that Puta Volcano is an active recording outfit in the last 6 or 7 years but I must confess that my first encounter with their music was a few weeks ago during their appearance on the New Long Fest. As a matter of fact, I was so astonished that I decided to find their new album, “Harmony of Spheres” and give it a spin or two (well, make that ten).

In the beginning, I’d expected a more straightforward stoner sound but the final result was even more surprising as it wonderfully blended the grunge style of the early 90s (Alice in Chains is surely a huge influence of Puta Volcano) with the modern heavy rock atmosphere.

The biggest and most valuable asset of the album is undeniably Luna Stoner whose ethereal voice is impressive both at the melodic and the aggressive vocal duties. On another positive note, we must add the crystal clear production that brings forth the brilliant compositions of the album and makes you wonder why there aren’t even more Greek bands that bring out such a stunning album at least from a production standpoint.

As a closing note, I would only recommend to take a good listen to “Harmony of Spheres” but also support this band because they really deserve it. This is one of the finest albums that I’ve heard from a Greek outfit! Way to go, guys…congratulations!

Highlight: The magnificent and catchy as hell “Jovian Winds”.