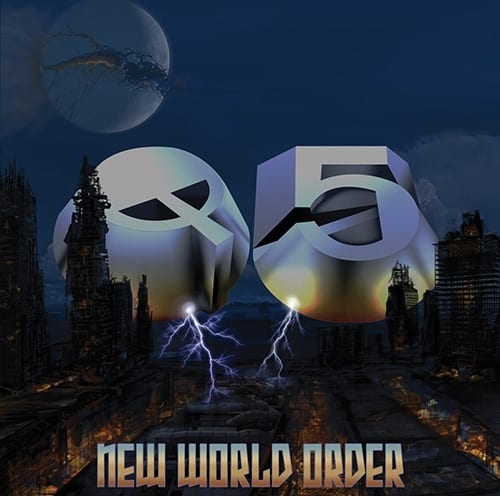 Frontiers Music Srl is excited to announce the release of the anticipated third album from Q5, entitled ‘New World Order’ on July 8th.
You can pre-order the album now on both Amazon.com: http://radi.al/NewWorldOrderAmazon and iTunes: http://radi.al/NewWorldOrderiTunes
Q5 was formed in 1983, comprised of members of two popular Seattle bands: vocalist Jonathan K and guitarist (plus famous guitar tremolo inventor) Floyd Rose from The C.O.R.E. and Rick Pierce (guitar), Evan Sheeley (bass) and Gary Thompson (drums) from TKO. The band released its first album, “Steel The Light” (on Music for Nations) in 1984, receiving immediate worldwide critical acclaim, and landing them touring spots with Twisted Sister, Y&T and Lita Ford. The success of “Steel The Light” led them to eventually sign with Polygram/Squawk for their 1985 sophomore release, “When the Mirror Cracks”. Due to personal differences, the original lineup dissolved shortly after this release.
In 2014, Q5 was asked to perform at Sweden Rock Festival, a performance that the band had agreed would be a “one off” show, but at the completion of the performance, it was obvious that this was not an ending, but merely a beginning. Upon returning to Seattle, The band secured drummer Jeffrey McCormack (former Heir Apparent, Fifth Angel) and guitarist Kendall Bechtel (former Fifth Angel) and began rehearsing formally as “Q5”. The band’s relaunch debuted at the ROCK You To HELL Festival in Athens, Greece followed by a headlining performance in Cyprus. The band then returned to Seattle to begin work on music for a new album. Kendall Bechtel, however, was unable to stay with the band due to personal reasons, so the band secured guitar virtuoso Dennis Turner to complete the lineup.
So, while the band’s debut album, “Steel The Light ” continues to grow in popularity all over the world, the fans are writing from all corners of the globe, eagerly inquiring about the next chapter in the Q5 story. That chapter begins NOW. With their new lineup solidified, and a new album slated for release, Q5 is poised to take its rightful place again in the hard rock/heavy metal hierarchy!
‘New World Order’ tracklisting:
1. We Came Here To Rock
2. One Night In Hellas
3. The Right Way
4. New World Order
5. Tear Up The Night
6. Halfway To Hell
7. A Prisoner Of Mind
8. Unrequited (A Woman Of Darkness And Steel)
9. Just One Kiss
10. Fear Is The Killer
11. Land Of The Setting Sun
12. A Warrior’s Song
13. Mach Opus 206 (Instrumental)
14. Get Next To You (Bonus Track)