Queensryche are back in Europe; WITHOUT Geoff Tate, for the first time! WITH Todd La Torre, for the first time after last year’s episodes… Unfortunately, almost every live date in April had to be postponed for next October. Fortunately, some of their concert dates “remained”, like the one at the PPM festival in Belgium. We had already made contact with the Ryche (right?) people and we simply had to wait a bit. It was around noon time, when a good ol’ friend, Fozzy O’ Hare, Queensryche tour manager, is meeting us outside the special interviews studio, a fantastic place indeed!

The brand new singer, Todd La Torre, is with him, along with the mighty Whip, Michael Wilton. “Good to see you guys again!” says the virtuoso guitarist and we take our places at the couch, to talk about the new album, the present and future challenges and, naturally, Todd and his new shoes he brought alongwith…

Interview by Costas Koulis and Dimitris Kazantzis. Our sincere thanks to Kevin Chiaramonte (Queensryche management) and Dario Dumancic (Century Media) for making this interview happen. 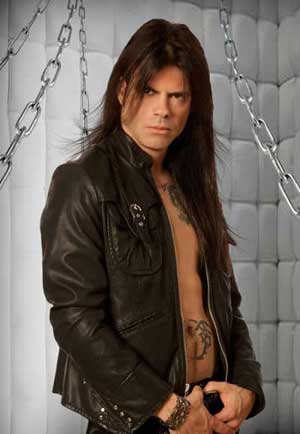 Rockpages.gr: Todd, how does it feel to replace Geoff Tate in Queensryche?

Todd La Torre: Honestly? I don’t view it that way! In the very beginning naturally I did but I think he was very unique in his role obviously, a thirty years careers with the band, it’s a legendary status, but, to be honest, I think that what I bring now is a new dynamic. I mean, being a drummer, being able to play guitar, being a true song writer rather than just a lyricist, I think that’s a dynamic the band never had. You know, I’m a true Metalhead! All these bands playing with us… I still listen to those albums! I was a fan first, now I don’t feel like that, I feel like a family member. And I don’t really view it as replacing… I think he was amazing in his own and this is a new time and I feel that I have my own qualities… I think this is a whole new thing!

Rockpages.gr: I was gonna ask this later but I think now it’s the right time… We asked Mike Stone, back in 2006, you know, “How do you feel filling Chris DeGarmo’s shoes” and all that and he said “I’m not! I brought my own shoes”!

Todd: That’s it! I just brought my own shoes on! I don’t look at it as replacing but if you wanna use the word “replace”… Certainly I’m able to perform songs now that the band has not been able to play, for various reasons… I think I’m doing a good job, I feel comfortable, I don’t feel any pressure or stress, I think I’m proving I can perform the old songs in standard tuning, and provide the feel that’s representative of that material… I respect the material and I want to deliver it the way the fans want to hear it! The band has given me complete freedom. They don’t tell me how to sing something or how to be or how to look like. They trust me. It’s a very smooth, stress-free environment.

Rockpages.gr: “Redemption” is in the same style with the rest of the songs of the new album?

Todd: No! There is a common thread… Michael wrote the melody for the chorus and the verses, I created the second half of the melody and the choruses and then we worked together, to have the final result that you hear. The chorus is very melodic… There is not another song sounding like that… They are very different in their own way, holding up equally.

Rockpages.gr: “Operation: Mindcrime”… Michael is writing some amazing songs and we all know how this album went. “Empire”, “Promised Land”, etc, etc. “Mindrime II” and Michael is doing three songs, the best in the album. Then, what happened? Is it psychological, you need to have something to be inspired by?

Michael Wilton: You know, it’s something like… The founding members, Scott, Eddie and myself, were feeling that we are growing apart creatively, and we really wanted to stay true to the roots of the band. I mean, let’s face it. At the last three shows all we could hear was people screaming “Play ‘Queen Of The Reich’! Play ‘En Force’! Play ‘Warning’”! And it was every single night and the fans wanted the core music they grew up with. Believe me, I’ve been writing! I’ve got a hard drive full of tunes…

Rockpages.gr: The song you did with Wretched Head, “Coming for you”? That was the best Queensryche song we’ve heard in a long time!

Michael: Thank you very much! That was a different combination of people but… I can’t really describe how I play but I can tell when there is energy and excitement… then the riffs come out! The hooks, the melodies… They are all parts of my psychic… Everybody is so excited and passionate about writing tunes. Together, as a band!

Rockpages.gr: Jimbo Burton is back with Queensryche! Whose idea was it?

Michael: Well, we’ve had a bunch of producers that wanted to produce the band… We have tried to get Jim to work on some of the previous albums but the old management, for whatever reasons, didn’t want to use him any more… And we thought “Let’s bring back the magic”! Let’s face it! “Operation…”, “Empire”, “Promised Land”… We have had all the pistols firing back then. And it was a great creative element to have Jim Burton there. To work with him, it was like nothing ever changed! It was something new to him, he had to get to know Todd and Parker… For Scott, Eddie and me it was like “Brothers again”… And everything started rolling really great! He set his parameters, it was like the old days.

Todd: Since the transition happened, some of the “A+” people in the industry have become part of the band again. Jimbo wasn’t in the mix for years! Pamela More has performed with us. That’s huge! We have one of the strongest artist management companies in the world! That’s our new management company, not the old one! We have a new booking agent. We have Century Media. They are smart, they see the change that’s happening, and they’re energetic. If it didn’t make sense to them to do it, they wouldn’t do it. And they believe in what we’re doing, they see the vibe and the energy on stage, they’ve heard the demos… This is a whole new time for the band. We are really excited to have all those people with us. Jimbo wanted to do it! He was just enthusiastic; when he saw our show in Los Angeles, he said “You guys blew me away”! 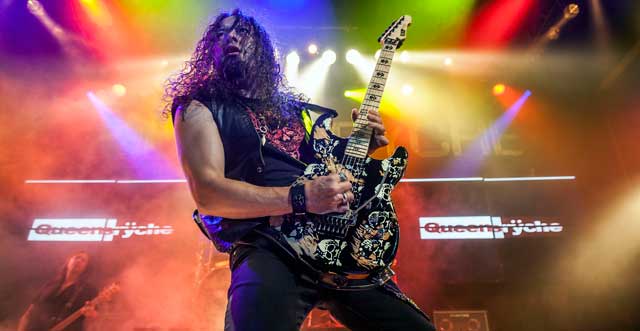 Rockpages.gr: Many people are saying that Queensryche are getting back to the 80’s sound. Even Scott made a statement about that. What is the main target with the new album? Reviving the 80’s sound? Reinventing Queensryche?

Todd: I think that’s very vague, very loose… The record does not sound dated. The material does not sound dated. Sonically speaking, it doesn’t sound dated. So, if someone was to refer to the music sounding 80’s, the only fair thing I could say, on behalf of the band, would be that we’re going back to some of the harder Rock elements but it’s not sounding 80’s. You know, our setlist is comprised of that decade and the 90’s, but I think that the new record sounds like what Queensryche would sound after “Empire” or “Promised Land”. There’s a fresh sound but also an older style in Queensryche we all love.

Michael: We respect the 80’s, we respect the recordings we did in the 80’s. It was an exciting time for us, developing our sound… It doesn’t sound 80’s… I think I know what you mean… 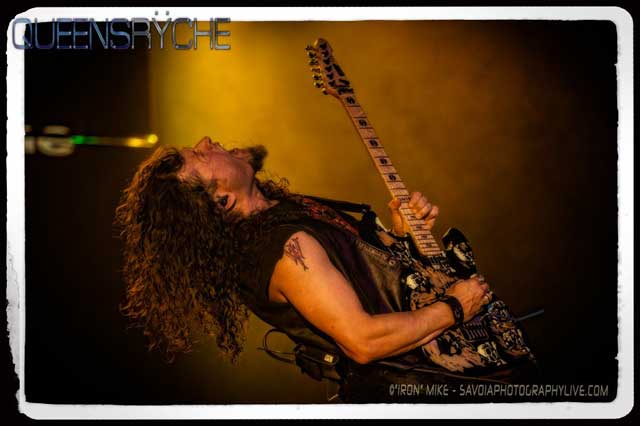 Rockpages.gr: It’s about the feeling, not the sound!

Rockpages.gr: Todd, you must be 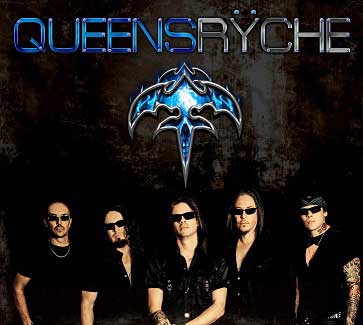 really excited about this album. This is actually your first album as a frontman. How do you feel about this?

Todd: Obviously I’m very happy! It is an honor… Like I said I’m very pleased with the record. I feel very proud of this record. I am happy that Michael has been able to 100% write everything that he wanted, there is no cherry picking, at least by not one person, it’s a democracy, we all listen, everything goes into the pot and what is most beneficial for the band stays. Nobody’s feelings are hurt… If I come up with a vocal idea and the majority doesn’t like it, then we change it and try to make it better! I’m happy with the album, it’s a historical moment in Heavy Metal, in Queensryche’s legacy! I always wanted to make the guys proud, I wanted to do a good job on this… Let’s face, it was a huge decision they had to make, but they had to do it. We are super excited! And we also write music for the next record! We are really anxious to hear and see the final product, when it’s set and done.

Rockpages.gr: I’m gonna use the term “Rychemocracy” (big laughs) and I’m gonna go to an interview that Eddie Jackson gave, a few days ago. He said that fans really embraced you, Todd! Which brings us to the next question. You met a lot of people during all this time. How would you characterize your experience with the Ryche fans, the RycHeads?

Todd: Again I think “honored” is a great word because it’s rare, although it has happened, for a band to change singers and continue on and become very successful again. So when fans come to me and say “Thank you for coming to this band” and “I’ve got my band back”… Sometimes I feel I’m not worthy of such a huge compliment, but they’re speaking from their heart, so all I can do is embrace that and accept it and it’s priceless to me and I try to spend time with every person we get to talk to or meet. Even when I’m in a hurry! At the end of the day I want to be known as a very down to earth, humble person, very appreciate and thankful for the fans. The fans will make you a star! Like Ronnie James Dio; people were saying what a great person he was! And that’s more important than singing four or five octaves, you know what I mean?

Rockpages.gr: Did you guys have a good time at the Sweden Rock Cruise?

Michael: Some of the people on the boat, that didn’t know about Queensryche… they were blown away! 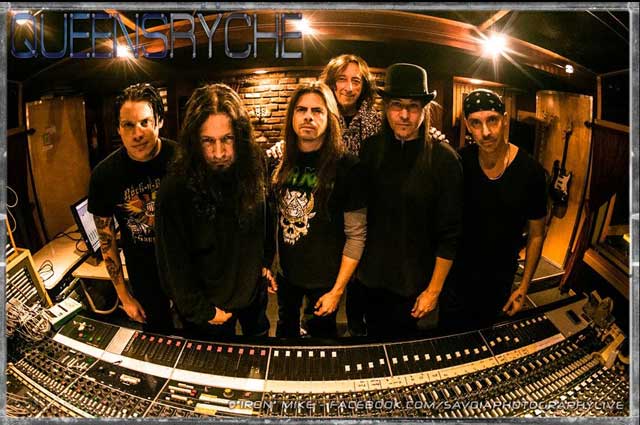