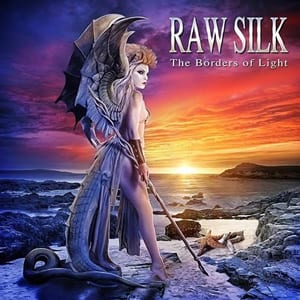 There are not many albums in the Greek hard n’ heavy scene that has achieved through time a legendary status and at the same time are unanimously accepted from all the fans in Greece (and not only). You see “Silk Under The Skin”, the band’s debut is rightfully considered one of the finest hard rock albums that was ever released in Greece as it looked straight in the eye all the best albums that were out at that time. So, you can imagine our shock when we learned that Raw Silk would return with a sophomore effort after 27 years!

Truth be told here; Raw Silk nowadays has nothing in common with the band that it first appeared in 1990 as only the leader and sole songwriter, Kostas Kyriakidis, remains from that line-up. The big question was: could the new Raw Silk album be a worthy successor to its legendary predecessor?

Unfortunately the answer is a deafening “no”! “The Borders of Light” might revolve around the overall melodic rock area yet it’s full of symphonic and a little bit of prog elements that have absolutely nothing in common with the band’s name. In addition, the huge problem is the compositions themselves as they are quite generic and detrimental thus leaving you wondering if what you are listening is Raw Silk or some other band! With the exception of 1-2 good moments (including the first single “Nobody Fills The Loneliness”) the rest of the album is rather forgettable. Shame…

Highlight: I believe that Kostas Kyriakidis should have chosen a different band for such a diverse approach.