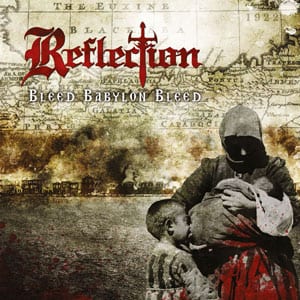 The anticipation finally came to an end. 2017 marks the return of Athenian band Reflection after 9 long years of studio drought. All well that ends well since the obstacles were far too many and great. From line up changes to financial difficulties and life threatening health problems. But all these seem a very distant memory as the release date for Bleed Babylon Bleed approaches.

I don’t want to spend the time on what the history, background and overall contribution of Reflection is since the real star is the new album which proves to be a sensation from the very first minute. It scores at kick-off with the opener Marching to Glory/Glorious Victory and it is more than obvious that the band won’t take any prisoners. Attention is drawn to the newcomer George Thomaides who reveals a different vocal style than the one manifested through his own band, Wisdom. Raspy and more aggressive, George becomes an excellent match. Dizzy and disoriented from this power metal attack, you find yourself leveled by the doom metal steamroller The Iron Tower with a trademark riff that has Reflection written all over it and guitarist Stathis Pavlantis literally on fire. The doom feeling lingers on through Fallen Shadow with the keyboards casting their own veil and paving the path for the doom metal masterpiece Takla Makan.His Majesty Mats Leven is at the helm appearing as guest and his performance fuses seamlessly with the style of the song. And while caught in this downward spiral, Time Traveller changes the mood to a more up tempo power metal style similar to fellow band Innerwish. With a catchy chorus that won’t get out of your head. The epic metal tune Stormbringer bridges the gap between Manowar and Iron Maiden. This is already the seventh song and the feeling is that only but a very few minutes have elapsed.

The flow is perfect and the quality of the songs combined with an all natural sound contribute to a delightful experience. The two remaining tracks are actually a unit dedicated to the Pontus Genocide, a topic that touches the heartstrings of all Greeks and especially band leader Stathis because of his Pontus descent. And his ancestry combined with the real life events and experiences of his Pontian Kalomana (meaning grandmother) is realized to probably two of the best songs ever presented by the band. Melodies inspired by the Pontian musical tradition and the utilization of the Pontian lyre as a lead instrument by Stathis himself will give you the goosebumps. The very last seconds of the album passing with the sound of the sea waves is only the mark that Bleed Babylon Bleed will start spinning for yet another time.

In a time where we tend to forget what the term epic metal really means, Reflection remind us with the most emphatic way and with an album the key ingredient of which is the very soul of its creators.