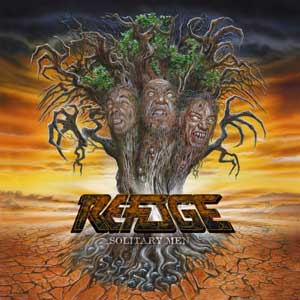 Rage is a German power and speed metal band that counts over 20 albums but –in my opinion- never achieved to qualify to metal’s champion’s league. Refuge is actually Rage with their lineup (Peavy – Efthymiades – Schmidt) of the best era of the band, according to most of their fans, between 1988-1994. During this period they’ve released four excellent album which established Rage among the best European metal bands. In the album “Solitary Men” the compositions, the ideas, the style and the quality are so good like it has not passed a day since then. It’s a natural evolution of this period and could be considered as Rage’s fifth album since then. Explosive compositions with heavy riffs, remarkable vocal and classical melodies, the trademark of Rage and Peavy. With the opening track, “Summer’s Winter” you can understand what kind of metal you gonna hear: tracks from the very deep ‘80s and ‘90s. Some very good tracks of “Solitary Men” are “Mind Over Matter”, “Let Me Go” and “Waterfalls”. Despite the fact that I am a big fan of Victor Smolski’s era in Rage I highly recommend “Solitary Men” as a worthy sequel to the period that established the band as a very good one.