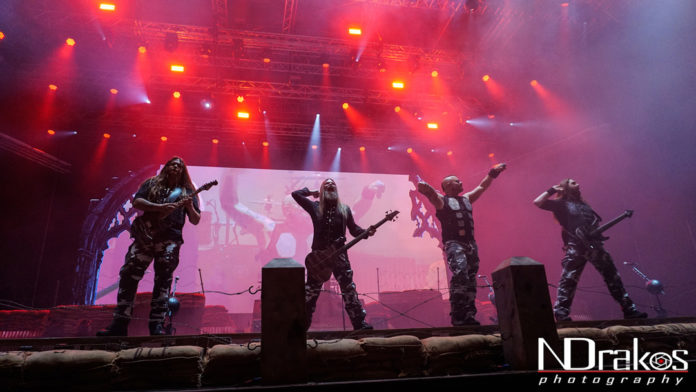 Day number eleven (if I’m not mistaken) for this year’s Release Athens and the schedule had power and symphonic metal. Three bands from abroad, two local ones. The outside temperature was not an ally, but our presence was required early on to support those who have the most difficult task, to stir up the crowd under the burning sun.

And The Silent Rage did it. With little time on their hands, lots of drive, energy and a great performance they played their material to an audience who really enjoyed this and showed it at every opportunity. They responded immediately to the prompts of singer Michael Rinakakis and founder/guitarist/leader Nikos Siglidis, rhythmically shouted the name of the band and did a sing-along of a melody from “A Piece Of Eden” with which they closed the set. I’ve seen too many Greek bands opening big summer concerts and I honestly don’t remember such a great audience reaction. Michael Rinakakis is a tremendously important addition to the band since he has a fantastic voice and delightful high-pitched (while he didn’t take off his leather jacket even for a minute, maybe for image reasons). He raises them up and it was a very right move to include him in their team, having to deal with the fact that the singer from Heraklion lives permanently in Sweden. Also, “The Serpent Lord” from their upcoming record shows that the guys are preparing a dynamite and I hope they release it soon. Finally, if they had a better sound they would win even more people. Great job.

Setlist: My Race Won’t Last, Stormwarrior, Sin Of A Pilgrim, Leading The Legions, The Serpent Lord, A Piece Of Eden

When Enemy Of Reality came on stage, several more people had already gathered. Respect to the band who, for the sake of image, chose to wear their classic outfits on stage despite the heat. Symphonic metal may not be something I enjoy, but I love seeing this band and of course listening to the incredible voice of soprano Iliana Tsakiraki, which every now and then left me speechless. They clearly had a better sound than The Silent Rage while they also played new material since they have a new album in the works. A very good performance that ended with the always touching “Tin Patrida M’ Ehasa”, which refers to one of the darkest moments in the history of our country, the Pontian Greek Genocide. The Greek bands responded to the task and they deserve to be congratulated.

Follow up with Dutch symphonic metallers Epica, who had quite a few fans waiting to see them. Just black t-shirts for the whole band and Simone Simmons standing out in her long white dress. Crystal sound, lots of energy and ease on stage. Simone excelled on ethereal vocal duties, as did guitarists Mark Jansen and Isaac Delahaye on the occasional extremes. The former joked on a very serious incident that happened some days ago (and good for him), telling us “I don’t know why Bruce Dickinson hates you, you’re great, we love you”. Highlight of the show was keyboardist Coen Jansen, who had his keyboards on a rotating stand, often going to the front of the stage holding portables and did crowdsurfing as he continued to play! Their fans, full of tension from the show, created a very nice atmosphere in the classic “Cry For The Moon” with their voices, while in “Consign To Oblivion” they also did a wall of death, which may not be common in this style music but the band has established it in this particular song.

Abyss of Time – Countdown to Singularity, The Essence of Silence, Victims of Contingency, Unchain Utopia, The Skeleton Key, Cry for the Moon, Sancta Terra, The Obsessive Devotion, Code of Life, Beyond the Matrix, Consign to Oblivion

The time of the Bards has finally arrived. Back on stage, the cover of the iconic “Somewhere Far Beyond” which this year marks its 30th anniversary, was dominating the stage and this foreshadowed great things to come. And when after “War Of Wrath” the concert starts with “Into The Storm”, you know that nothing can go wrong. And it didn’t go after Hansi told us the classic “welcome to the show and welcome to…dying”. Damn!. “Time What Is Time” that followed up made me scream. The same with “Journey Through The Dark”. “Black Chamber” brought chills while the epicness of “Theatre Of Pain” made the night even better, since by that time everyone would have realized that Blind Guardian were playing the entirety of “Somewhere Far Beyond”. In “The Bard’s Song (In The Forest)” the crowd did their part, as Hansi sang ten to fifteen words max. What a magical concert moment, what an amazing atmosphere of hundreds of voices covering up everything. Sound and performance for a seminar, the only bad thing was that they played for an hour and a quarter. The classics “Mirror Mirror” and “Valhalla” had fans shredding whatever vocal cords they had left, with the end of course having us singing along to the refrain of “Valhalla” even after the Bards had left the stage. What else can you do for such a unique and special band. There are no words to describe their greatness. The Germans left us speechless. Just incredible. Hansi you are a god.

Setlist: Into The Storm, Welcome To Dying, Time What Is Time, Journey Through The Dark, Black Chamber, Theatre Of Pain, The Quest For Tanelorn, Ashes To Ashes, The Bard’s Song (In The Forest), The Bard’s Song (The Hobbit), Somewhere Far Beyond, Mirror Mirror, Valhalla

Now, about what followed let me make something clear. I never liked Sabaton. And after this performance, nothing changed. I enjoyed parts of two of their songs, that’s all. But I really liked what I saw and I have to give them credit. They are one of the few bands that came out after the new millennium and have managed to have such success in such a short period of time and permanently occupy the top positions in every festival worldwide. The scene resembled a battlefield. Sandbags, barbed wire and drums on top of a tank. Fires (lots of fires), smoke, cannons (sometimes way louder than they should in my opinion) and a video wall with images that perfectly complemented the scenery below. The band is like a machine, unstoppable and perfectly synchronized. Joakim Brodén, one of the two remaining founding members, is a charismatic frontman and the two guitarists with the bass player went up and down the stage while also regularly contributing with backing vocals. The fans ecstatically sang along to every verse while the band itself talked about their love for us several times. Both through Brodén and through bass player and second founding member Pär Sundström, who to everyone’s surprise (I guess) spoke Greek as he has started learning them and in a very good way unlike a well-known bass player of another band who produced a lot of comedy when he tried. They also played “Sparta” which they don’t usually do (as I understood correctly) and they closed with “Coat Of Arms” while a huge Greek flag was flying back on the video wall. After looking at the setlist of their last concerts, I found that they only played them in our country because of the Greek lyrics in them, so kudos to them for this move. A performance worthy of the status that Sabaton has now attained.

Another day of Release Athens was crowned with success. Bands that gave their best and fans that left smiling at the end. And for those who find it strange that Blind Guardian are playing under Sabaton (myself included, although I understand the reason) I caught a group of youngsters saying that the Bards were a pleasant surprise since the Swedes know how good they are on stage anyway. Well, when you say pleasant surprise one of the most classic bands in power metal with a 35-year career and records that have influenced the genre like only a few, you have an ignorance of what is happening to you in the matter of music. Signs of the times? Great discussion for another day. What is certain is that all of us, in one way or another, had a great time that night. And that’s what counts.

Encore: Primo Victoria, Swedish Pagans, To Hell and Back