Rockpages.gr editors were present at the “Final Battle” 12 years after Manowar’s last show in Athens and report the following…

Definitely I wasn’t really warmed up by them as much as I liked (the weather did a far bbet job on that). Four seemingly tired musicians and Helena Michaelsen honestly trying but not achieving the best possible result. Fatefully their 45-minute set was really tiresome and not helped at all. 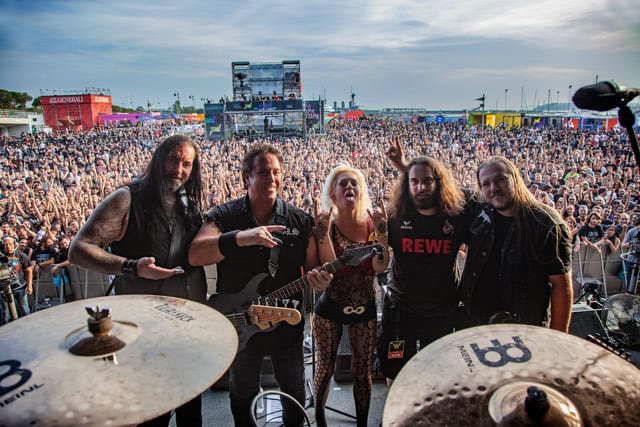 Rhapsody of Fire (the band led by Alex Staropoli, in case you got confused) had the task of warming up the crowd before Manowar’s main event. All in all, an easy task if you ask me due to the fact that the temperature was already high and the overall atmosphere electric as everybody was more than excited that Manowar was back in Greek soil. Unfortunately and despite the effort of the Italian outfit, they couldn’t win over the crowd but not because they put on a mediocre show or the set was uninspired. Not at all. They had a bad sound throughout the 60-minute show that didn’t do justice to their really remarkable performance. Especially, singer Giacomo Voli was really impressive and his vocals were impeccable. Naturally, when Rhapsody of Fire played “Dawn of Victory”, “Holy Thunderforce” and “Emerald Sword” we turned back…well, at least 20 years when Rhapsody reigned supreme.
Sakis Nikas 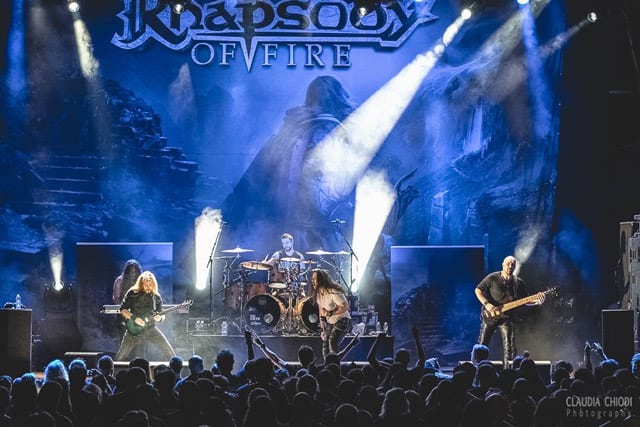 Veni, Vidi, Vici.
Gaius Julius Ceasar, 47 b.c.
2 millenniums later Manowar transcended the Athenian Rubicon, 12 years after their last visit here and breathed life to the famous words of the legendary Roman general. It didn’t take them more than a few minutes to win this battle and capture all 12.000 present with an overwhelming performance. I could go on and talk for hours, after all Manowar is my absolutely favorite band. In this case though the unanimous acceptance and admittance of greatness crowd wise, speaks volumes. It certainly feels like partial restoration of order and vindication for the most wronged and underappreciated band of the metal universe. 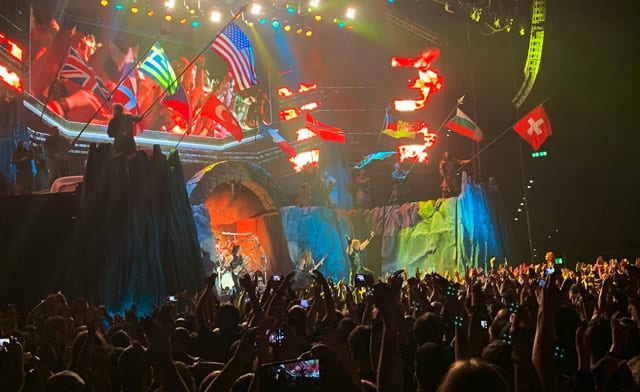 What an incredible performance by the Kings of Epic Metal that was! Quite possibly their best ever in Greece. And if this man can sing that powerful at the age of 67 then some of his colleagues should definitely head for an early retirement. Having reduced in a minimum way unnecessary elements that tarnished throughout the years their concerts and presenting an impressive stage show, Manowar made their Manowarriors singing along and throwing their fists in the air throughout the set. This was truly a huge performance by the American outfit! 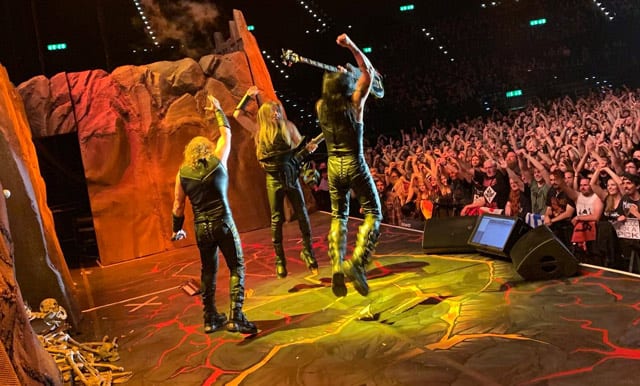 Manowar shut me up, in 2007 with an amazing setlist on March Metal Day. The intense, short and of a medium set list first appearance of 1992, the troubling three days at Agathi club in 1994, the 1999 Rockwave fiasco, were all eliminated when listening to “Mountains” and “Secret of Steel”. I had been satisfied forever or at least so I thought. The full show (stage, flames, fumes, warriors, fireworks) on Friday’s Release Festival at Water Square was what we had never seen before! Powerful, pure sound, dreamy performances, breathtaking song changes, a POWERFUL Eric Adams, an ecstatic choral audience in a magical / iconic night, worthy of their name! And that’s THE KINGS OF METAL! I was deeply moved with “Swords in the wind” and “Hector’s Final Hour”. Ravanging live, of intense emotions that will be left engraved in our memory for a long time.

It’s no more than two months ago that I witnessed Manowar live in a venue with 500 people capacity. That means that I was lucky enough to be really close to the stage. Two days ago I believed that watching a legendary band like Manowar play live so close to the fans, is a feeling that no live show can overpass. I was wrong. The fact that I could see all this massive stage show and also stand behind 5.000 screaming fans, created a feeling that I will never forget. Plateia Nerou was filled with no less than 12.000 metal fans. In the audience there were entire families eager for the show and. Of course there were many die hard Manowar fans there too, veterans with many shows under their belts but their eyes gave away the feeling of the first time. With the first double kick of the drums, the first flairs were lit and the sky turned red. Everyone’s hands were flying in the air screaming all at once “Other bands play – Manowar kill”. The setlist lasted approximately two hours and for many people felt like a few minutes. Ι strongly believe that if Manowar would like to do a 5- hour gig like they did in Bulgaria there would be only a minimum amount of people who would leave the venue earlier. Finally I should mention the amazing and almost flawless organization of the whole event. It’s 2019 and until two days ago I had never been to an open air concert so well organized like this one. There was not even a second that I missed Terra Vibe Park in Malakasa and the very hard times we all went through trying to enjoy the festival. 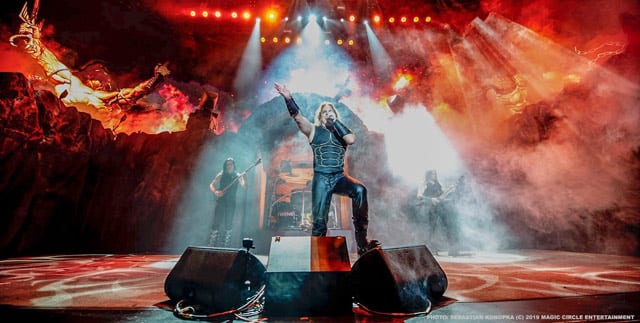 Pride…absolute pride for this band! All of you who were present know exactly what I am talking about. I am sure that all the others who couldn’t make it to the venue are already feeling the same thing as the social media are stormed and full of photographs, videos and comments of that special night. And just imagine how much bullshit we had to endure before the show. All those naysayers and wimps that put down Manowar and ridiculed the whole spirit of the band and their fans. Let it be. We won’t focus on those negative aspect. After all, Manowar was always a band against the world. Tell you what, though. When you see and hear Adams in such an impressive vocal and physical form, DeMaio prowling the stage like a true and imposing leader and all the Manowarriors singing every single lyric of those timeless Manowar tunes then the emotion chokes you and you can’t really put it down to paper!

You see every single Manowar concert is a really personal experience that in essence all will appreciate it but none will fully understand. So, it’s absolutely impossible to describe what I felt during “Fighting The World” (not because it’s the best Manowar song but because it’s the first cassette that I bought), it’s unachievable to display my emotions during “The Power of thy Sword” and “Hector’s Final Hour” (that took me back in the first ever Manowar concert in Greece). Everybody has a highlight of his/her own. The only constant is the pride and the smiles of everyone’s face during the 2-hour set. This was not simply a Manowar victory…this was a victory of all the Greek Manowar fans that never let the band down.
Maybe this was the best Manowar show in Greece. This is how I feel, at least. With such a performance, such a set list and a crystal clear sound in front of a majesticstage set, nothing could go wrong. Again…as I said in the beginning: pride…only pride for Manowar!