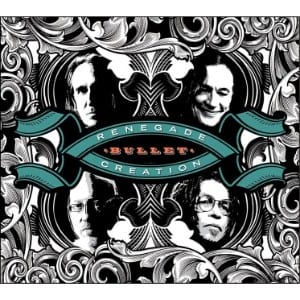 When a music group is consisted of familiar names with impressive careers, you expect a matching result. Unfortunately, this doesn’t happen every time, and that’s Renegade Creation’s case. If you manage to overcome the awe created by Robben Ford’s four Grammy Awards, Michael Landau’s countless sessions, Jimmy Hasslip’s demonic precision and Gary Novak’s collaboration with Cypriot singer Alexia, I don’t think there is anything more left out of “Bullet”.
Of course, their level of playing on their classical blues rock is superb, not that we expected something different, but except from some outbursts, and some personal input from the superstars the band has on its ranks, the songs won’t give you any serious chills. Of course, it’s important and pretty cool, when musicians of this caliber join together, but I have the feeling that watching those guys during rehearsal would have been much more interesting than listening to the album. Maybe, if their names weren’t so big, the expectations would have been lower, but after such a promising debut, as theirs a coupe of years ago, it’s quite fair to expect a lot more. But, at the end of the day, just like football, a bunch of great players doesn’t necessarily make a good squad.