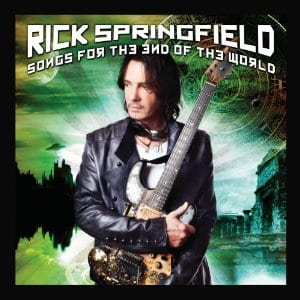 Rick Springfield is an artist who doesn’t need any introduction. He has achieved numerous hits in the past, with “Jessie’s Girl” surely being the most well-known of them (as a matter of fact, the song is featured in the crazy and hilarious movie with John Cusack “Hot Tub Time Machine”). Parallel to his career in music, Springfield has penned a revealing autobiography and he has starred in various films along the way. In short, he has left his permanent stamp on Art. That being said, the news of his return in the studio with a brand new record couldn’t pass unnoticed.
Reading the credits of the album is like going down the road of the who is who in the melodic rock scene as one easily recognizes the names of Matt Bissonette, Tim Pierce, John Waite, Richard Paige all of whom participate on “Songs For The End Of The World”. Howver, upon listening to the new songs, our initial expectations are not matched with the actual thing…I am not saying that we are disappointed or disillusioned by the final result but given the fact that Springfield is a legendary musician, then we’d expected far more things. And if it wasn’t for the uptempo rockers “I Hate Myself” and “Our Ship’s Sinking” (that also include some very introspective and emotional lyrics), then we would judge more harshly the album. On a positive note, though, we must underline the fabulous level of Springfield’s voice.
Highlight: The album is being released with various different cover sleeves for all the…Jessie’s Girls out there!