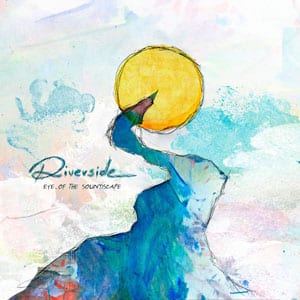 While I was reading the liner notes from the new Riverside release, some interesting information came out. First of all, this is not an ordinary album. It’s something that Mariusz Duda (bass, vocals) was dreaming of many years now, who in my head is something like a second Steven Wilson with all these projects that he’s doing and the free time that he never has. It’s a collection that in his mind closes the unofficial trilogy that was made with their three latest albums. It also might be the end of a chapter for the beloved Polish progsters because this is a complementary album and the futures released might have a different sound, a different character.

“Eye Of The Soundscape” is an enjoyable compilation that consists of two CDs with a total running time over 100 minutes. In this album we listen to different sounds that have always been part of this band’s DNA. Basically, this are ambient and electronic music but it is so well written that it keeps you interested until the end. The loops by Mariusz and the keyboards by Michal Lapaj are the stars of this show, while the lyrics are completely absent. We only listen to some vocal melodies in some tracks. Nevertheless, this is a very interesting effort that can easily get you lost inside its atmosphere and  let you relax and travel within its melodies if you spend some time in it. It has four new songs, two from “Rapid Eye Movement”, also two from “Shrine Of New Generation Slaves” and five from “Love, Fear And The Time Machine”. All the old songs can be found in the special editions of these albums while two of them have a new mix.

Finally, this release features the amazing artwork of the well-known artist Travis Smith and of course it’s dedicated to Piotr Grudzinski, the co-founder and guitarist of this band who passed away early in 2016 by sudden cardiac arrest. This is (I hope) the last album that we listen to his guitar. Riverside decided to continue as a power trio and all we can is sit back and wait for their future attempts.