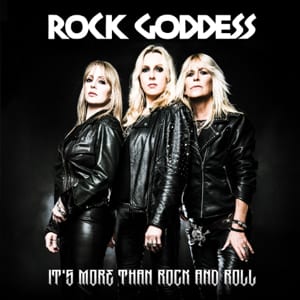 The Londoners Jody Turner (vocals / guitars) and her sister Judie Turner (drums) created Rock Goddess in 1977 at the tender age of 13 and 9 respectively! With their father being their manager and mentor (!) and the addition of Tracey Lamb (bass) they released their homonymous album in 1983. Relative success followed, while the lineup, except for the two sisters, changed several times. They released two more albums with great NWOBH (“Hell hath no fury” and “Young and free”) but after several problems and obstacles in their career, the inevitable end came.

And here we are in the year 2017 and the reconnected (with the original lineup) rocking ladies release their “It’s more than rock ‘n’ roll” EP, with three new compositions.

Of course, the flame is still burning, and the new tracks are tough and rhythmic. The EP starts with the title song, followed by “Back off” and ends with “We’re all metal”. All three songs glorify the rock and metal lifestyle, with good, quite massive production and somewhat more “childish” backing vocals than they should be. That is a small detail compared to the passion they radiate and the headbanging activity you will be performing!

I think the best way to describe their current sound is like Joan Jett playing Accept style, with Manowar-like lyrics. It’s quite clear! We’re all metal!

Check it out, as well as their old ones. You will find some goodies there; you will not believe your ears (e.g. “It will never change”).