The first day for the well established Greek outdoor festival had come, but not with the best signs as the attendance was poor, definitely one of the poorest in its history. It’s characteristic that when Mamma Kin was getting on the stage, that was five in the afternoon, there was almost nobody there! Certainly that day’s line up was controversial with the Locos that didn’t draw the crowd that the promoters were expecting, with two classic strong Greek bands (Last Drive, Nightstalker), and an American one that we haven’t seen for a long time (Nashville Pussy)…

I’ve watched those guys almost three months ago opening for Marky Ramone and I really liked them, especially when I heard their version of the Who’s “Baba O’Reiley”. Now, the scenery was totally different with the band having the awkward role of being the first act to play on the festival with only twenty people watching. The venue must have looked enormous from the stage! Despite that the guys put their best in front of their friends and Terra Vibe’s staff, and those who came early on Saturday. They played with passion, attitude and the excitement that an opening act is supposed to have without getting to worried about the small crowd. Actually, that was typical of the entire day. Among the songs they played for us they included Motorhead’s “The Chase Is Better Than The Catch”, and again “Baba O’Reily” that closed their set that went down well, and warmed up our necks for the bands that were going to follow…

With the sun up high and still burning Nightstalker got on Terra Vibe’s stage. Personally, I think that these were ideal conditions to listen to a stoner rock group. The heat was intense, and the sun was shining, just like if you were in some desert. The experienced Athens rockers played old and new songs with their familiar dynamics, and aggression. It didn’t really matter that the divided in two arena was almost empty. Nightstalker used their time giving everything they had and won the small crowd. On “Just A Burn” and “God Is Dead” the crowd went wild, as well as on their new song “Dead Rock Commandos”. Argyris, the lead singer, said something that summarizes the situation, and comments on the small attendance and the uncomfortable silence in between: “it’s nice and quiet here”. 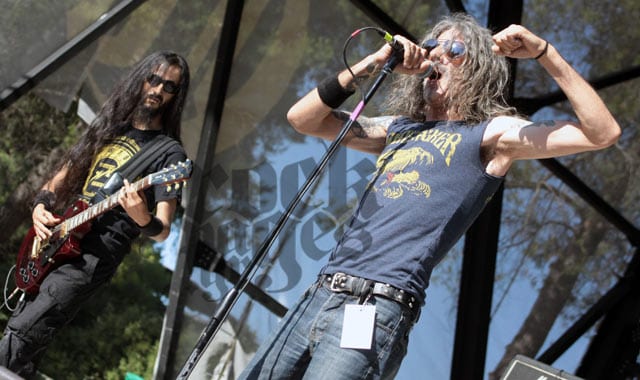 Nine year ago, when Rockpages.gr was in the beginning Nashville Pussy were the first band that we had the chance to interview in person and the first band about which we wrote a live report. So, the feeling we have for them will always be very special. Apart from that, a band like this in any concert anywhere in the world could easily be the headliner over any other band, since they can make even the ants go crazy! If you are looking for attitude, power, energy, intensity and –unfortunately- a few surprises, then Nashville Pussy the band to watch, and you should definitely come closer to the stage! 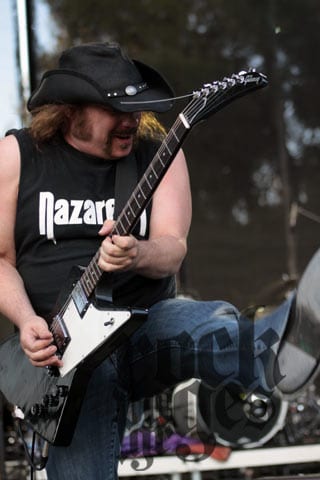 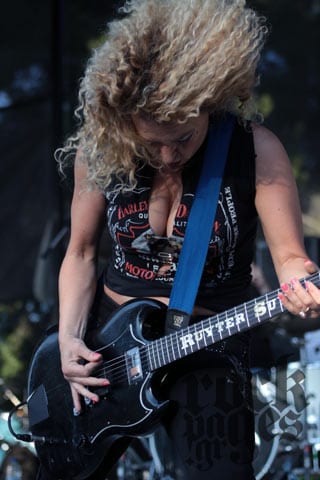 Their set was a bit different than their previous shows, since they had almost a month off live performances, since they last played with the Supersuckers (I wish I could have been there!). As soon as they got on stage, and after they solved a problem with female Angus Young’s, Ruyter Suys, amps they taught rock’n’roll… Blane was kicking high in the air, while he didn’t waste his time and jumped on the amps that were under the stage and wandered around. On his left Karen Cuda was more relaxed, moving up and down with authority and posing with her light blue bass guitar. On the other side the… animal Ruyter Suys was doing her thing. This time she didn’t take any clothes off, neither she gave oral sex to a beer bottle, but she only needed one minute to pass on the spirit of genuine and unpretentious rock’n’roll, when at the end of their set spat a shot of whiskey to the crowd, climbed on the back of a security guy, and all that of course without stopping her solo-, fell on the grownd, arching her body all the way back and took all the strings off her weary SG bare-handed… Respect! 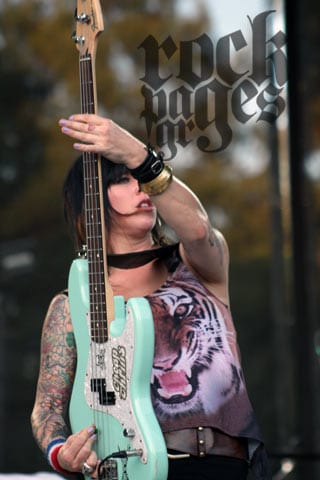 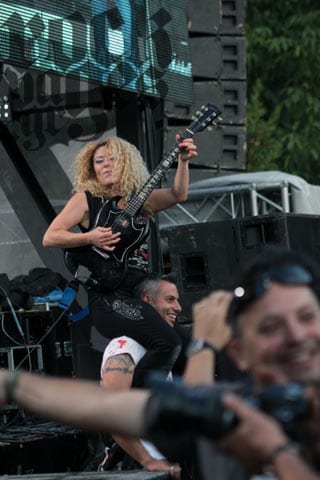 Some of the songs they played were: Pussy Time, Shoot first Run Like Hell, Say Something Nasty, Come On Come On Come On, I AM So High, Ain’t Your Business, Hate And Whiskey, Drunk Driving Man, Hit Me, I am The Man, Goodbye Baby Go To Hell, One Way Down, You Give Drugs A Bad Name, Why why, Go Motherfucker Go…

I believe that with such a heartfelt show, over the top performance, swagger and all that Nashville Pussy should have been higher on the festival’s bill, and in an ideal show headliners of every festival on the planet! Despite my exaggerations what they did in Terra Vibe, which is what they usually do, and I hope they will keep doing for many many years in the future cannot be taught, or copied because it’s 100% true and honest! I wish it won’t take us another six years to see them again!

A few minutes before 9 o’clock one of most historic Greek rock n roll bands “The Last Drive” hopped on stage of Terra Vibe park. The few people that were there reacted to every move of the band. From “Blood From A Stone” and on the crowd and the band were in constant motion.  The energy was diffused over the stage and the few technical problems that occurred at the start and the end of the set-list but they were not enough to spoil the generally good performance they gave. Just after 10 the band bid us goodnight. Or so we thought. A kid came on stage to ask us if we wanted some more. “The Last Drive” re-climbed on the stage to a great crowd reaction for the first encore of the day. Ten minutes later the band bid us goodnight for the last time with a nice wish. “Stay Human”. 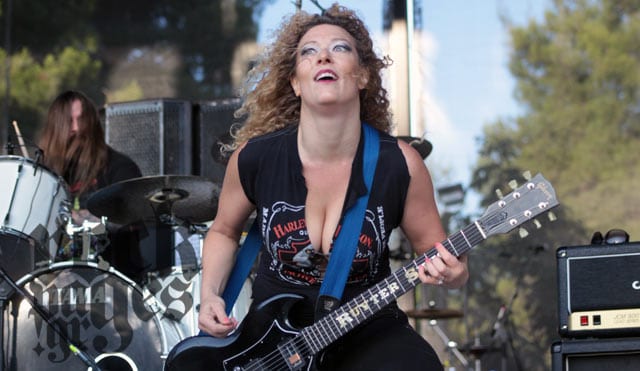