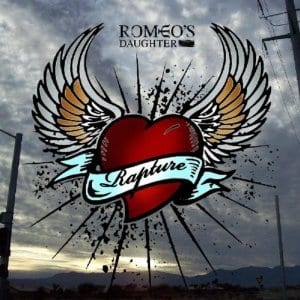 British AOR rockers Romeo’s Daughter always had and always will have something exotic about them, thanks to Leigh Matty’s beautiful and charming presence. From their self-titled 1988 debut they gave the impression that they carried a hard rock mood followed by perfectly fit vocals, a combination that worked as a charm. After 3 years of recording absence, they are back with a brand new album, that is quite different from what we would expect and love of them, judging their late 80’s potential.
Their 3rd album with the title “Rapture” belongs to the list with the disappointing AOR come-backs of 2012, as far as I’m concerned. The band’s attitude towards what is considered to be the mainstream fields was already known, but I would not expect them to be so indifferent towards fitting with rock fans contemporary needs.
It’s been 20 years since this band held a glamorous spot in the AOR map. For some, even after ”Rapture”  they are one of a kind! But for me, unfortunately it didn’t work; something that is indicated by the fact that during the second listening I pressed “stop” to replace it with something more intense and with more guitars!!