Unfortunately, it wasn’t meant to see Moonspell live in Athens. Not that we haven’t seen them many times before, but they are never enough. At least, we had the opportunity to watch for two days the mighty Rotting Christ. A band that after lots of hard work, has made a great name in the scene and established a career in worldwide level. Together with them, five groups from the local scene, two for the first day and three for the second one. So, this article will have a slightly unusual format. 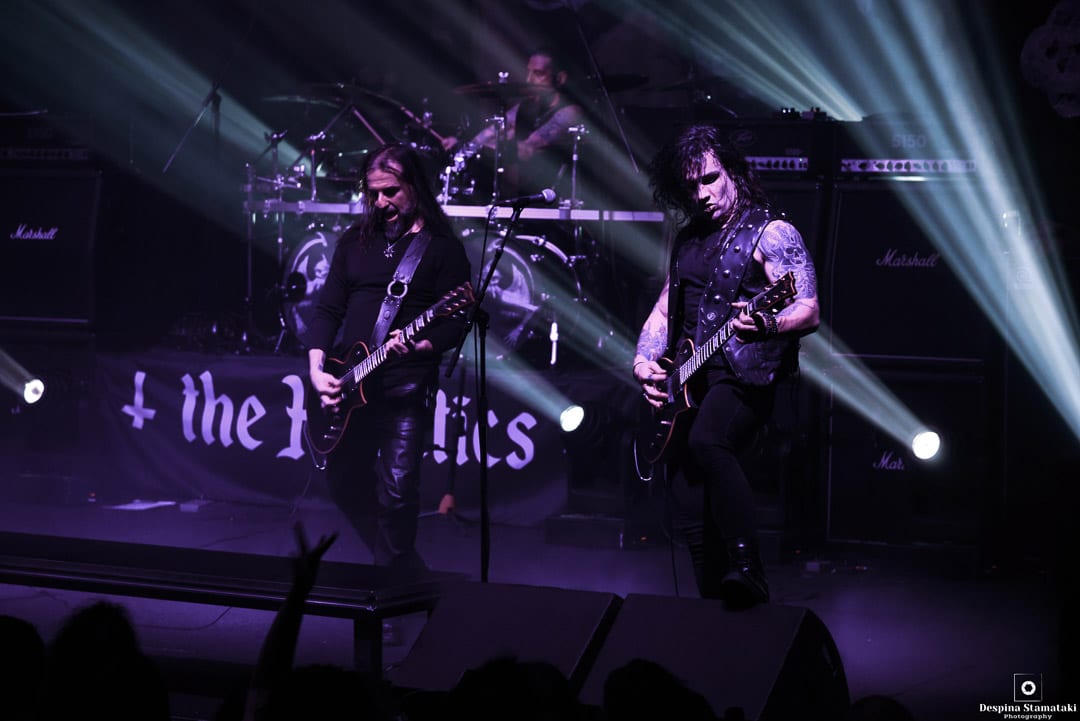 Motherfaster were the chosen ones to open the first day, a name I’ve never heard before and I was curious of what I was about to listen. The Athenian power trio are together since 2011 and recently they released their second album “Slower Father” (smart title) after the self-titled debut in 2015. Their music was close enough to classic heavy metal, but with many stoner elements, especially in the vocals. A strange fusion, as they seemed to me that they were balancing between these two different genres. Still, there were some people who reacted positively on their songs, there was even a mosh pit in one of them. Maybe it had to do with the bassline that reminded a lot of “Ace Of Spades” or the Motörhead vibe in it. They didn’t impress me, but they did a good show. 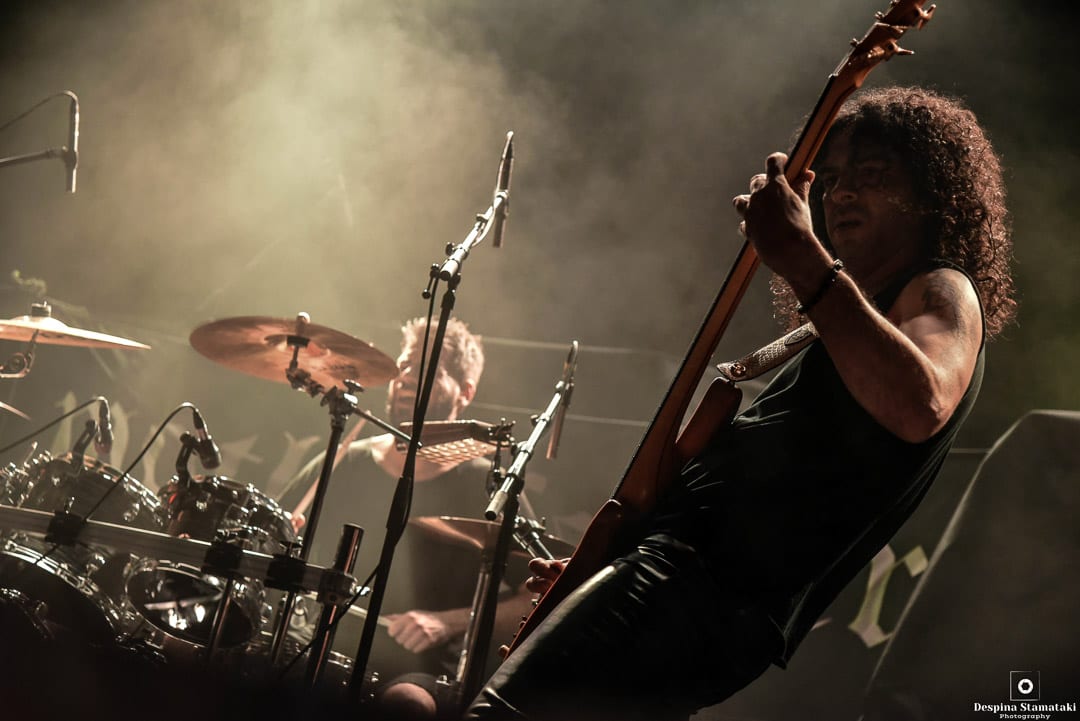 Scar Of The Sun were next on stage. It’s been many years since I’ve seen them and they have a new outfits for the stage now. They played songs from their two full-length releases and also some from their upcoming album that is supposed to be ready within the year and they sounded more extreme at certain points. They also had a guest on stage, Vasilis Mazaris of Daylight Misery for the harsh vocals on “Ode To A Failure”. It was nice to hear their gothic/groove metal, but once more I found that Terry Nikas wasn’t good enough on his vocal duties. 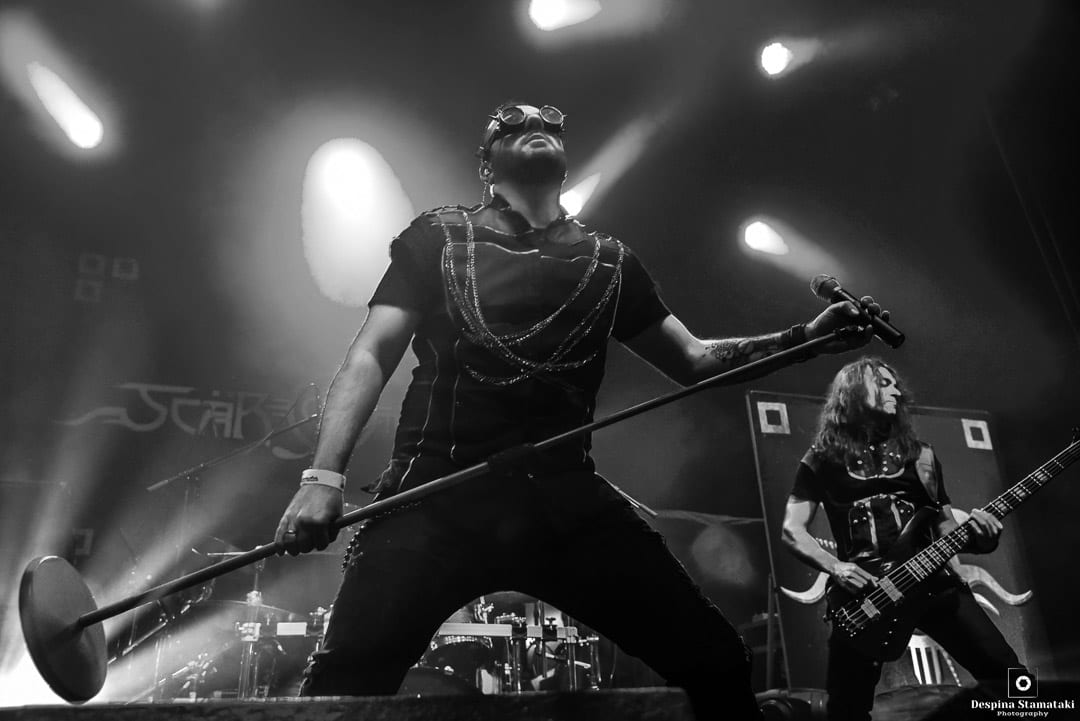 The second day started with Cursed Blood, a newly formed band that released its first demo some months ago. Old-school black death/metal from the Athenian quartet, that had a sold performance. I didn’t like the noisy sound, but I believe this is what they wanted to achieve as none of the support groups had any problem with it. For example, the next two bands that have a similar style had a clearer sound.

While waiting for Abyssus to enter the stage, I have to congratulate the guy who chose to play the first album of Scars On Broadway from the speakers. Completely discrepant compared to the bands that played that night, but still a great record. Besides that, I have to say that this was the best performance among all the support bands. A great show by Abyssus with music that is heavily influenced from the mighty Obituary. Killer compositions and excellent vocals by the only founding member (and bassist until some years ago) Kostas Analytis. They also played one song from their up-coming second full-length album, that will be released soon and most probably will kick ass. We’ll wait eagerly.

Setlist: Into The Abyss, Enthrone The Insane, Summon The Dead, Sacrifice, Operation Ranch Hand, Unleash The Storm, Metal Of Death, Visions Of Eternal Pain, Those Of The Unholy 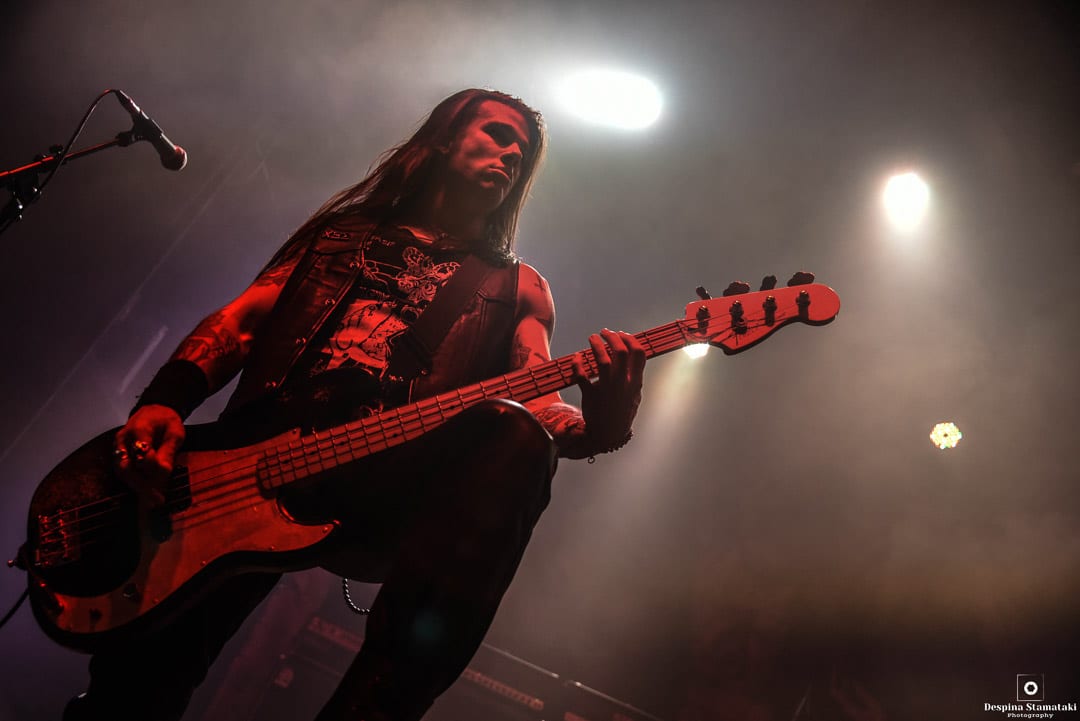 Last support band, Death Courier from Patras. The death metallers are veterans in the scene, as they were founded the same year as the headliners. The power trio had a good stage presence, but I didn’t like the fact that most of their few-minute tracks ended as abruptly as they started. They are also preparing a new album that will be released soon and the new compositions that they played seemed quite interesting.

Now, what should I say for the lords? Day one and the fans screamed their name in rhythm as soon as Scar Of The Sun stopped playing. After a short time, two giant crosses (not inverted) appeared left and right of the stage and “666” marked the beginning. Excellent sound and performance and the band without much delay plays songs from the past decade. The fans created great moments when they could by singing along the melodies of the guitars. The impressive part is that they may seem simple to perform them, but they create an amazing atmosphere. Even when Sakis began…chanting, “Apage Satana” was one of the special moments of the night. After that, they travelled us way back. “Fgmenth, Thy Gift”, “The Forest Of N’ Gai” and the necessary cover (sort of) of “Societas Satanas” from Thou Art Lord before they take us to more atmospheric paths with “After Dark I Feel” and “Among Two Storms”. After that, some songs also from the last decade before they leave for the encore. “Gloria De Domino Inferni” (goosebumps) was played from the speakers and three amazing tracks from the early-90s were the ones that ended the night. What if I didn’t hear anything from my favorite album? That was about to change in some hours. 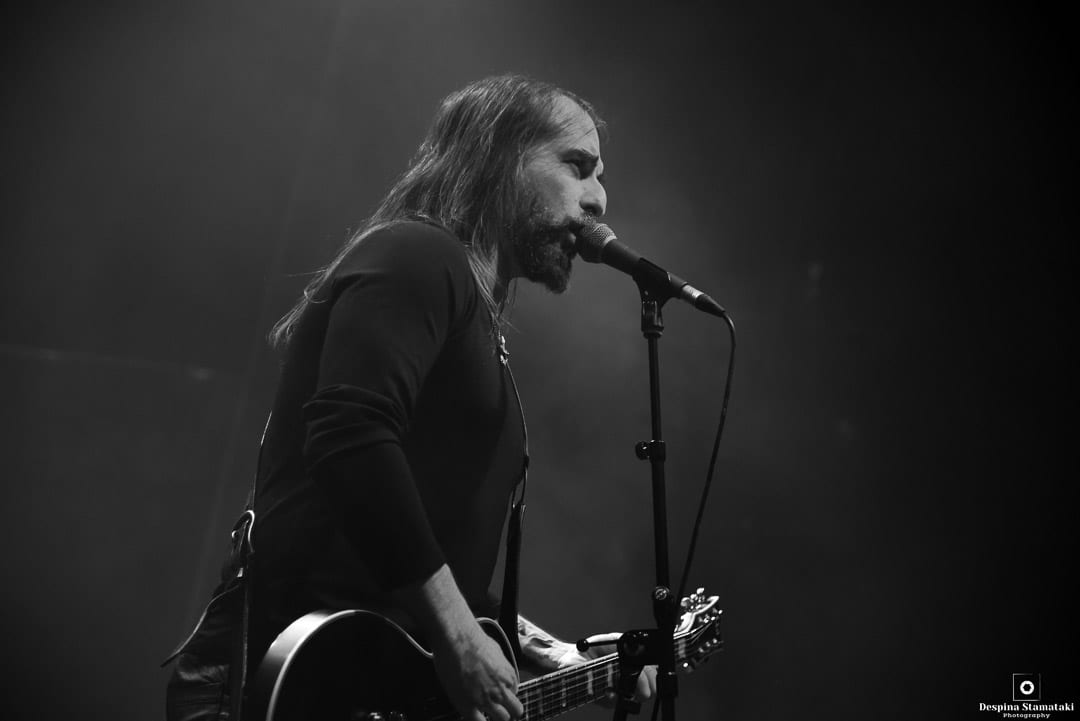 Day two. This time, the crosses were fallen with blue light on them and the cover of the mighty “Triarchy Of The Lost Lovers” in the background with red light on it. “Feast Of The Grand Whore” for the beginning and I challenge you to find one band that still plays songs from their demo after more than thirty years in the scene and thirteen studio albums. “Exiled Archangels” followed before the epic “King Of A Stellar War”, where the whole Academy sang the first lyrics. Also, great atmosphere with the sing-along during the melody of the refrain that was followed ideally by “Archon”. I don’t have to explain how ecstatic it was to witness these historic tracks played with impeccable precision. Of course, we had the ones that weren’t in the original planning, as they intended to play only from the 1989-1996 period, but 1997 and 1999 joined for a bit. Now, I have to congratulate the new live guitarist of the band. Kostas Foukarakis (Exarsis) was more than amazing in his performance. He played with great precision all his parts and he captured the feeling of the old-school sound when necessary. Great passion from Kostas Heliotis, Themis was solid as a rock behind the drum kit and Sakis was full of excitement like a small child. Shortly before the end, “Gloria De Domino Inferni” gave me goosebumps once more and when Sakis said the words “The Fifth Illusion”, I screamed so loudly that even him might heard me. The end with “Non Serviam”, as in the first day, doesn’t need any words to describe it.

Setlist (Day Two): Feast Of The Grand Whore, Exiled Archangels, King Of  A Stellar War, Archon, The Forest Of N’ Gai, Societas Satanas, After Dark I Fell, Among Two Storms, The Old Coffin Spirit, The Nereid Of Esgalduin, Visions Of The Dead Lovers, The Fourth Knight Of Revelation, The Sign Of Evil Existence, Transform All Suffering Into Plagues, Fgmenth Thy Gift, The Fifth Illusion, Non Serviam

In conclusion, during these two days Rotting Christ played thirty different tracks. Still, you can find a lot more that many consider classics that weren’t there. They have a discography so big and rich that they need five days to keep everyone satisfied. But they are a band that doesn’t forget its past and they’ve proven it all these years. As a huge fan of them, even if I prefer much more their first two periods compared with the last one, every show of them is amazing and they try to please all of their fans (old a new) for their support until now. Nothing but respect for these legends of the Greek scene. NON SERVIAM. 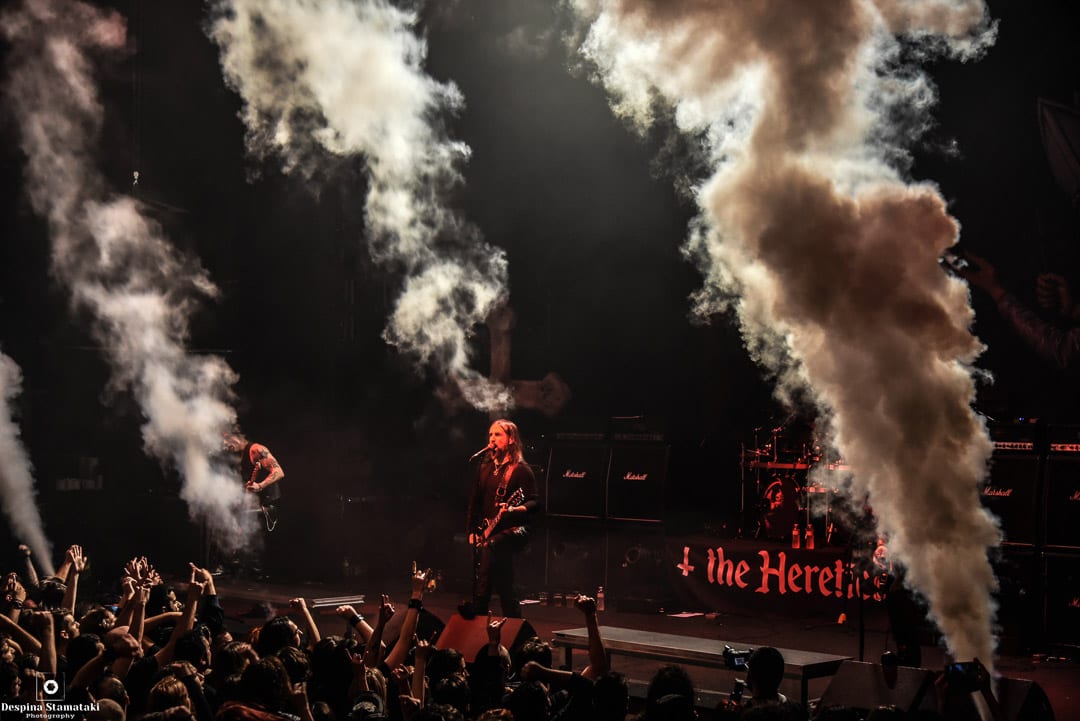