When it was first announced that Ryan Roxie would return to Greece for another show it was really a no brainer as to whether we would be there or not. Of course, we would be there! After all, Roxie is probably the coolest and most fitting guitarist that Alice had since the demise of the classic Alice Cooper Band in the 70s. Also, he’s been with the Prince of Darkness for 23 years while his hard rock credentials include such bands as Electric Angels, Slash’s Snakepit, Casablanca etc. So, we found our way to The Crow Club and gladly we saw that the place was almost packed.

Snakebite is a Greek tribute band that focuses on the majority of Cooper’s back catalogue. Apart from the fact that Roxie was the special guest, the Greek Nightmare Fan Club celebrated its 15th year of constant presence and operation. At 23:00 the opening chords of “Hello Hooray” rushed through the speakers and the follow up with “Spark in the Dark” and “Snakebite” set the night on fire while Snakebite adds the necessary theatrical elements of the famous Alice Cooper show. So we are treated with nurses, spiders, the…decapitated head of Alice Cooper and various other stints created by a three-piece theatrical team. In the first half of the show, Snakebite songs cued mainly of “Welcome To My Nightmare” and the overall performance was really remarkable. We should also mention that the female backing vocals helped a lot and it was a great addition to the show. 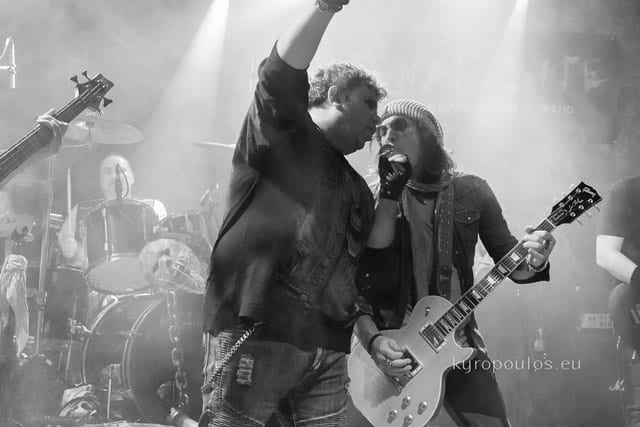 Ryan Roxie hit the stage almost at midnight and for the next hour (or show) played with the guys from Snakebite classic songs like “No More Mr. Nice Guy”, “Is It My Body”, “Department of Youth” (with special reference to Ryan’s longtime friend Johnnie Holiday who was of course in the club…by the way, Johnnie if you are reading this, how about a comeback show with Star Star?). Around that time, Snakebite left the stage for a while and Roxie played “Perfect” (from “Dirty Diamonds”) with an interlude of “Get It On” (T’ Rex) as the similarities are quite striking. He also did an impromptu cover of “Man of the Year” (from “The Eyes of Alice Cooper”). Snakebite returned for more classic tunes including the surprise number of the night, “Brutal Planet”.

The closing notes of “Under My Wheels” found as all more than happy and content by a great show. Ryan Roxie is an amazing performer and one of the most likeable guys in the industry. His overall performance was impeccable and it this is one of the main reasons why Alice really depends on this man! Also, if you haven’t checked out Snakebite, make sure to do so as the guys work really hard in order to recreate the Alice Cooper show.

Editor’s Note: The photos were published on the official Snakebite facebook page.