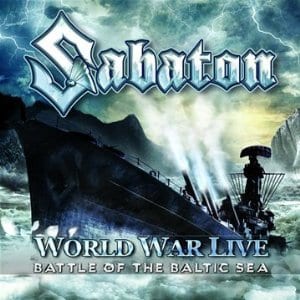 They’ve become a first class band, actually flirting with the Champions League Metal division… The Swedish have fought their way up; they’ve played numerous live shows over the past few years. They’re looking mighty on stage, they totally communicate with the crowds, they perfectly reproduce their songs live; the audience is having the best time and the band keeps playing on, galloping and conquering; their epic style and powerful songs are the very key to their success.
Year 2010 found Sabaton on the road. They’ve been cruising Europe… Yeah, like they weren’t touring this year. They even toured more; played in the US as well… Thus they recorded over twenty of their own songs and released this double CD.
First CD contains their unique show during their cruise last year. For the boys and gals not familiar with the subject, the band had sailed, along with some other guest bands and 1700 crazy fans and more and cruised the Baltic Sea. Now, if you’re looking for this sort of entertainment, apart from the magical and dreamy ShipRocked, there are similar cruises in Europe, like the one this year, along with Sabaton once again, which is already sold-out; two thousand Metal peeps will have a blast at sea, listening to their fav music…
Second CD is a set of songs they did live on stage, during their World War Tour in 2010… There is also a DVD in here, featuring their show at the Rockstad in 2008 plus three of their videos.
It’s an exceptional package for all the people that haven’t seen them live on stage. Sabaton perform killer shows… for the glory of Hellas!