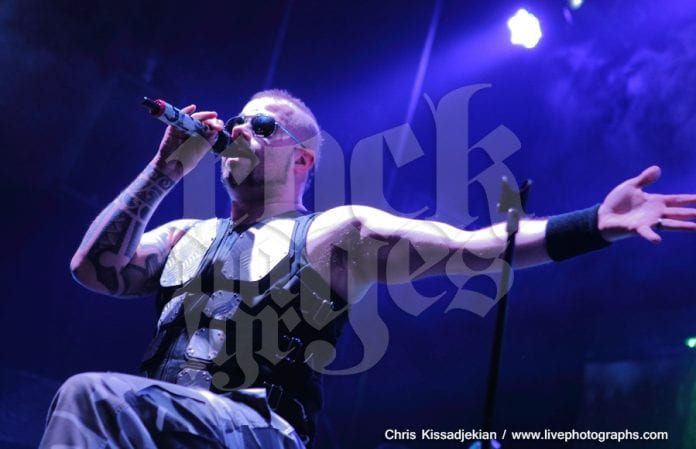 The hottest band in the world nowadays, from the younger generation of course, is none other than Sabaton. The Swedish outfit has managed to create a buzz and gather under its wings a huge fan base all around the world. Even the mighty Accept has decided that it would be a good business move to be the special guest on the current European tour of Sabaton. I guess that says it all, right? So, let’s see how the show was on that rainy night in Athens… 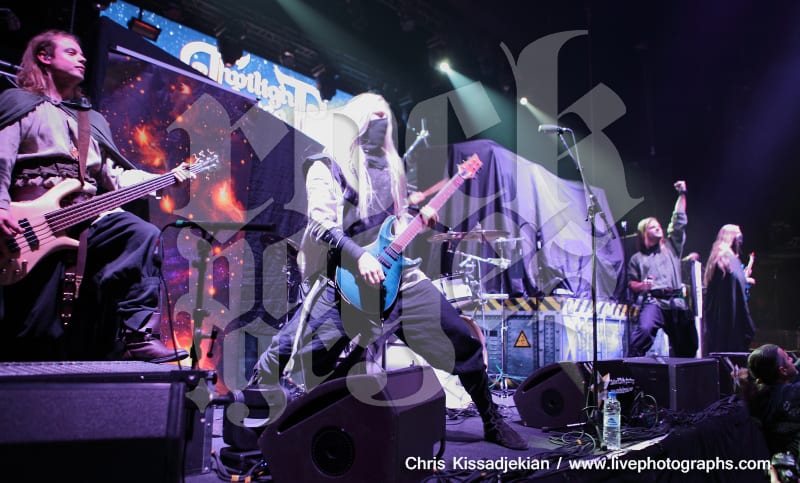 The first thing that you notice upon entering the venue is the big (make that “huge”) merchandise stand of Sabaton. Honestly, this is definitely the biggest merch stand I’ve ever seen in my life (let aside the festival booths)…it was even bigger than the respective KISS stand back in 1996 (when KISS reunited and all…merch broke loose)! The second evident thing is that the venue is packed and the majority of the young fans wear proudly their Sabaton t’shirts. Having said that, I also experienced a…time-travel situation as the opening act Twilight Force was playing something in between Rhapsody and Dragonland. It was like 1997 all over again when the romantic power/symphonic genre was at an all-time high. Not my cup of tea but the fans seemed to like it, so I guess they must be doing something right…right? 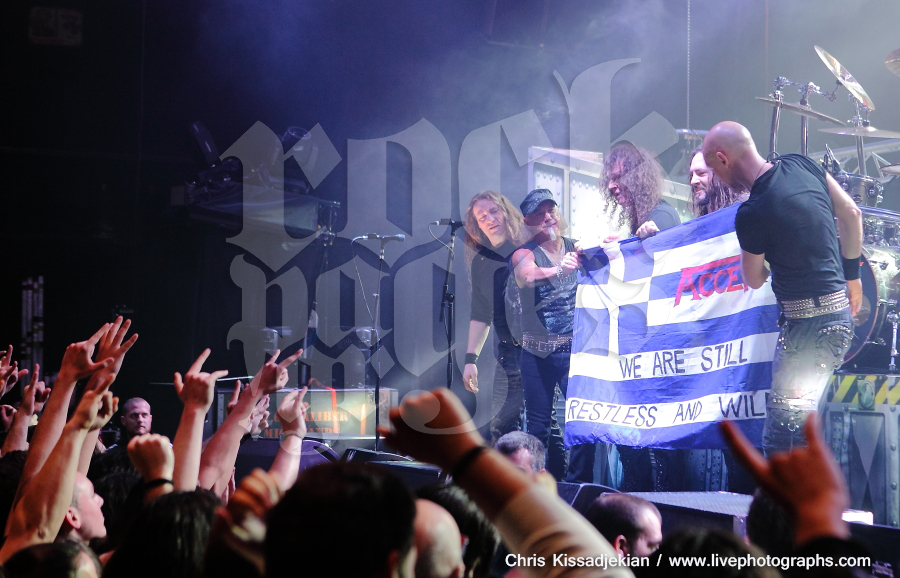 Up next was the legendary Accept; the main reason for attending the show. There has never been a time where an Accept show has failed me! Never! And it was the same thing all over again! Hoffmann and Baltes were the undeniable ringmasters of the show, the leaders of the Teutonic metal attack! Tornillo was pretty good and consistent while drummer-extraordinaire Christopher Williams was unbelievable behind his massive kit! Accept presented a balanced set list with songs cued from their classic and latter era. It goes almost without saying that an absolute chaos and fan-frenzied moments occurred when the band played such classicas as “Fast As A Shark”, “Restless and Wild”, “Princess of the Dawn”, “Balls To The Wall”, “London Leatherboys” & “Metal Heart”. The same applied, also, for the newest arsenal of tracks (eg. the opening “Stampede”, “Stalingrad”, “Final Journey” and the majestic “Teutonic Terror”). On a negative side…one hour is not enough for an Accept concert. 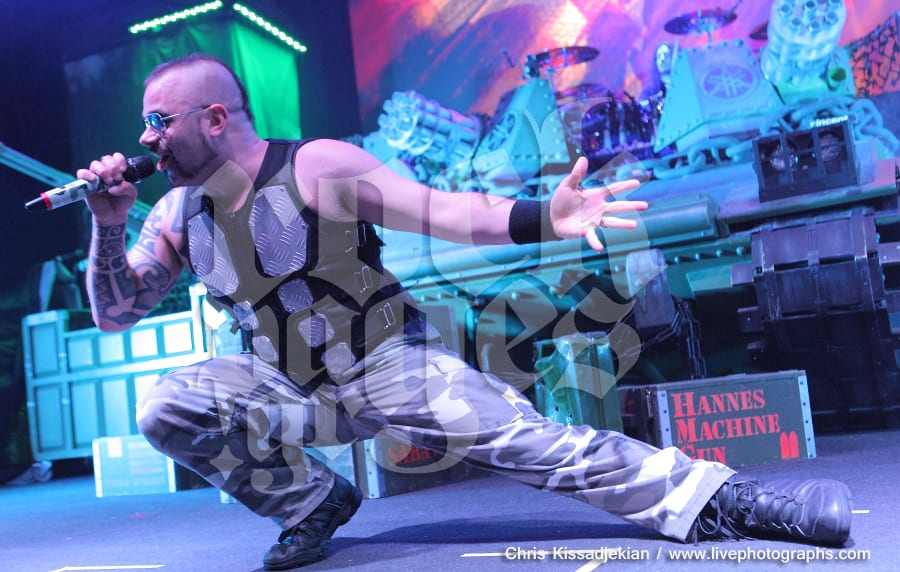 I must be honest with you; I am not a big fan of Sabaton. I really appreciate the fact that they had worked tirelessly in order to make it big and I totally respect them for their sheer will and energy to put on the greatest metal show on earth! But if we put aside the impressive stage show, the personnel/sidemen that were dressed as Spartan warriors, the huge and state of the art video wall, the constant change of stage clothes and of course the imposing tank on stage, I really don’t get what’s the fuzz from a pure musical standpoint! Also, I have seen far better bands on stage than Sabaton and I can’t empathize with the vast majority of fans that go crazy over them! Again, this is my personal point of view but I guess that the numbers talk and that’s all that matters in this time and age. My good friend and colleague here at Rockpages, Mariza (who is a big Sabaton fan) , expected far more songs from “Coat of Arms” while she found the acoustic set a little bit tiring and out of place…after all, the fans wanted pure heavy metal and that’s what they came for! 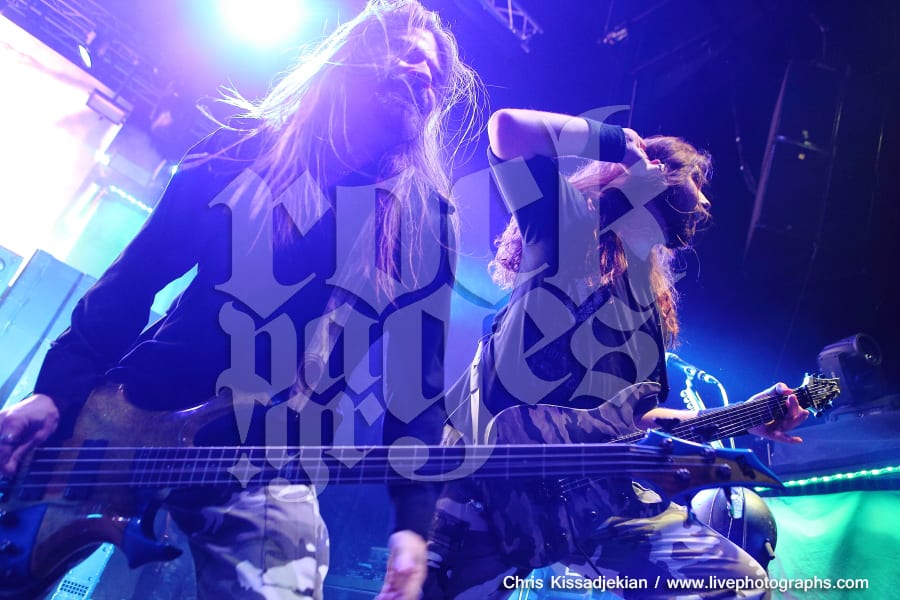 All in all, Sabaton keeps on making a good run and their impressive stage show leaves lots and lots of fans in awe! The fans are by their side and that is what really counts…