Rockpages.gr sat down with Sabaton’s Pär Sundström and Thobbe Englund in England and talked about almost everything! From the terrorist hit in France, to their love of the Greek audience and their upcoming –yet secret- concert in Greece, the new album’s recordings, to their infinite love for… ‘80s music! Interview: Mariza “Crash” 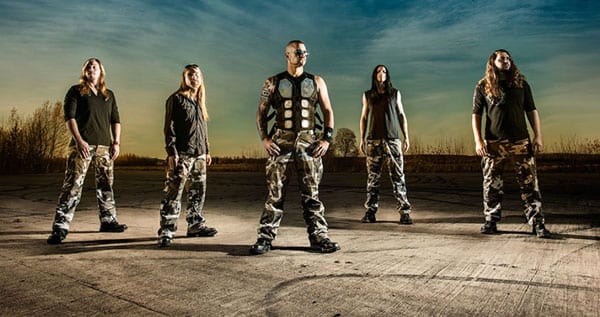 Rockpages.gr: My first question won’t come as a surprise to you, but where do you stand on the terrorist attacks? Do you feel threatened every time you go on stage since what happened in Paris?

Pär Sundström: We visited France just shortly after the attack and we played in Bataclan in Paris just a few months before the attack there. Actually, our promoter was promoting the concert of Eagles of Death Metal. He was supposed to seat in the ticket counter that night but he changed with his best friend .Something like that makes you think more of the danger. We don’t take any extreme change of our lifestyles.

Thobbe Englund: Of course we think about it because it’s so close to us. Terrorist attacks happen all over the world but this one happened where we are. Against our fans, against us and the people who work with us, so then of course it gets closer to us. We don’t want to feel threatened but it’s always there. We always check exits and our crew members they look and check everything before we play at any venue.

Rockpages.gr: Did you have any friend in the venue while it happened?

Thobbe Englund: A journalist friend but he is ok.

Rockpages.gr: Is it true that Joakim walked 323 Miles from Sweden to Norway because he lost a bet?

Pär Sundström: He couldn’t do it. He had to stop. We had to rehearse. It was a very long trip. Impossible to make! It was just a stupid idea. He started it but then he realized that it was insane!!! He walked for more than an hour and he returned home. But, he didn’t walk for several weeks like he was supposed to! 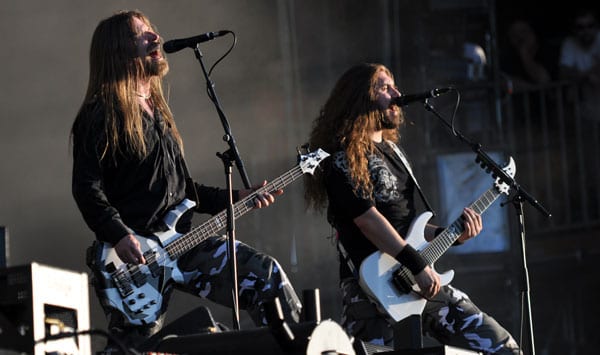 Rockpages.gr: Do you have any favorite bands of the 80s era?

Pär Sundström: Of course. All of them. Europe if I have to name a Swedish one. Then Guns n’ Roses, Judas Priest, Iron Maiden, Manowar, Kiss…

Rockpages.gr: Any common band for all the band members?

Thobbe Englund: Oh yes!!We have Guns N’ Roses that we all love and everybody loves Kiss.

Rockpages.gr: Pär, before 1999 when you formed Sabaton, did you play in any other bands? 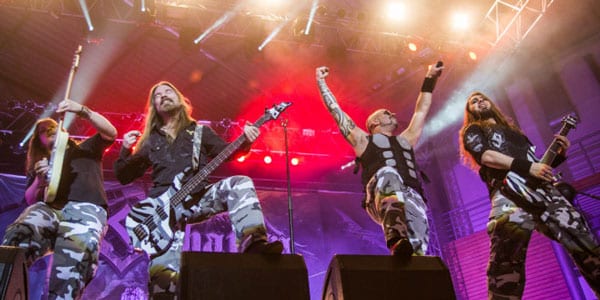 Rockpages.gr: Name some favorite bands of the underground Swedish scene of the 80s.

Pär Sundström: Alien and Keen Hue. A band from our region.

Rockpages.gr: What about Heavy Load?

Pär Sundström: We love them. They played in Greece I think recently. Marta from Crystal viper was there too as a guest.

Rockpages.gr: Which is your favorite audience outside Sweden?

Thobbe Englund: I will have to say Bulgaria because they are really fuckin crazy. The next is Cyprus because they are absolutely crazy about us .We played several years ago in a small club for 400 people. It was mind blowing

Rockpages.gr:How do you feel about Greece?

Pär Sundström: Absolutely fantastic. There is this very special moment in the Heroes tour when we played ‘’coat of arms’’.The audience went absolutely crazy. It’s a natural high. It’s insane. We get Goosebumps every time. That moment we knew that we were gonna come back and play.

Rockpages.gr: Do you have any new dates for Greece?

Pär Sundström: Its a little bit too early to say but I know of course which date it is. 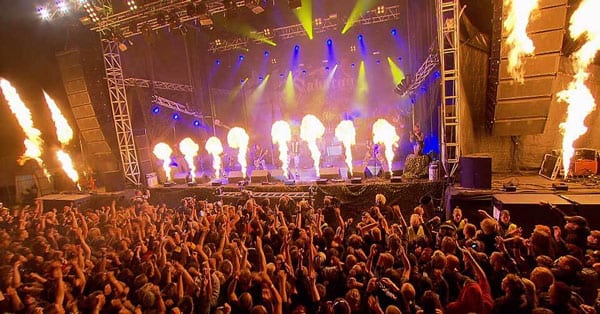 Rockpages.gr: Have you thought of any song that you would like to cover but has nothing to do with Metal?

Pär Sundström: Many! We talked about the song ”Highland” (by the Swedish band One More Time) for the Heroes album, we talked about different songs about heroes. Like Tina Turner’s. ”We don’t need another hero”. All covers about Heroes’ ‘I need a hero” (Bonnie Tyler),”Hero”(Mariah Carey). All of them. But we didn’t really do it. Someday it might happen.

Rockpages.gr: When do you plan to release the next album?

Pär Sundström: We just started recording .We have a release date. Everything is confirmed .But until is official we don’t wanna say anything because we don’t want to screw up the expectations. It will take one year but I can’t say more

Rockpages.gr: Did you have a bad break up with any of the previous band members?
Pär Sundström: Some break ups were better than others and with some we still hang out .But with some we don’t talk that much. Recently we were with Daniel who played the keyboards with us. And i meet with the drummer all the time. Oscar, I haven’t seen him for years.

Thobbe Englund:i met him in a burger place actually but he doesn’t play music anymore.

Pär Sundström: The break ups weren’t perfect but was alright because we all knew what was going on and everybody knew what was best for everyone. 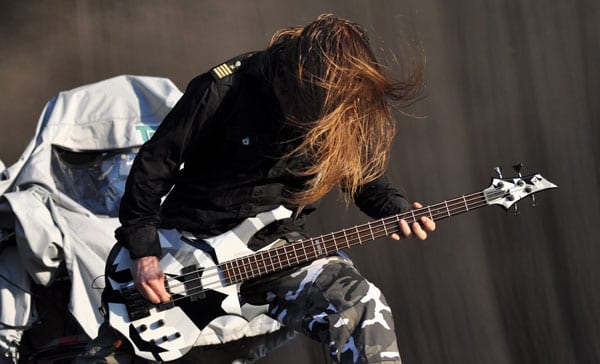 Rockpages.gr: Was it because of the music or because they didn’t really care about the band?

Pär Sundström: Definitely not because of the music. The reason was more about the tour. I love to tour huge.150 to 160 shows a year. We wanted 300 days on the road and some people said” no let’s do 20 to 30 concerts a year. When we were on stage everybody liked it. But it’s not just about that. It’s about the life. We only have 2 1/2 hours’ time off of stage and people have families so it’s not easy for them. When you are on your 30s things change. We started when we were 17teen. Now it’s different.

Thobbe Englund: Oscar didn’t even want to play guitar anymore. Is not only the tour, there are many things as you can see… Oskar liked playing music and now he doesn’t. Many people liked it when they were 15teen.Now they don’t anymore. So, it’s for the better for everybody.

Pär Sundström: After we got Thobbe and Chris everything went faster upwards for us .We got new energy for the band and we could also tour more, do more shows and everything was simpler. 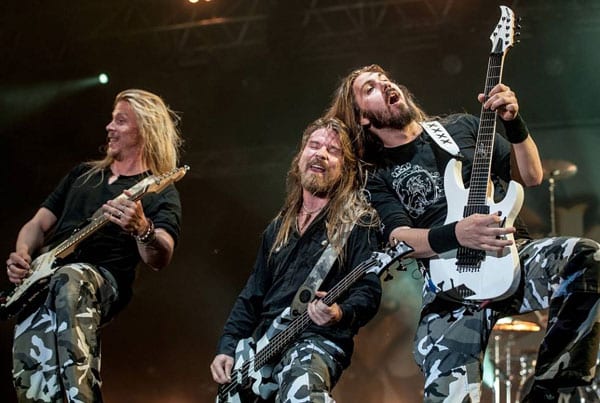 Rockpages.gr: Chris is playing with Nocturnal Rights too, right?

Pär Sundström:  Yes but they are not doing anything right now. They are moving very slow. They have been talking about a new album for six years. It has been 9 years since the last one.

Rockpages.gr: In your lyrics you are telling stories about wars, history, battles and kings. In Greece for example, and maybe that stands for other countries too, someone might believe that you are a right wing band.

Rockpages.gr: Was there someone that told you about it before?

Pär Sundström: If you go back 10 years. Sabaton is releasing Primo Victoria.A lot people were saying Sabaton were neo-Nazis. Today, Sabaton is such a well-established name and we have made a clear statement that we don’t care about politics, we just write songs about history. There are of course and these who will misunderstand Sabaton but not on the same evident because anywhere they can ask is Sabaton a Nazi band I say NO or is Sabaton a communist band? No. And is Sabaton a political band? No. We just like history. It’s much more interesting from other stuff. 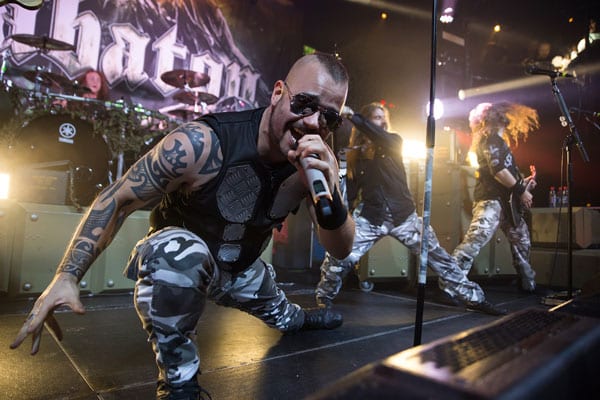 Rockpages.gr: Thobbe did you help them with the lyrics the last four years?

Thobbe Englund: Not the lyrics, but music wise. Me and Joakim we get together and we sit together for a session or two and see what happens. We wrote together two songs for Heroes and we have written a song together for the next album. But, lyric wise it’s mostly Joakim and Pär because they are the experts on history.

Rockpages.gr: It was very nice talking to you face to face. Lycka till (Swedish for Good Luck)!! 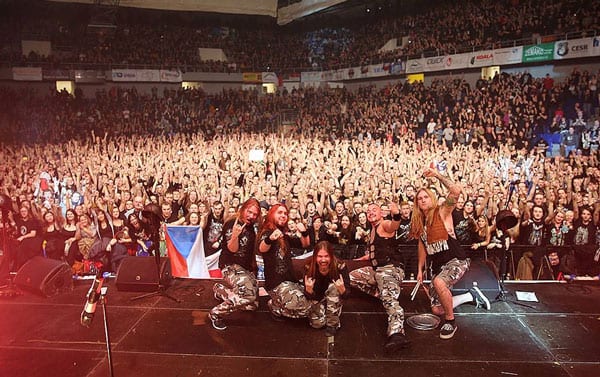